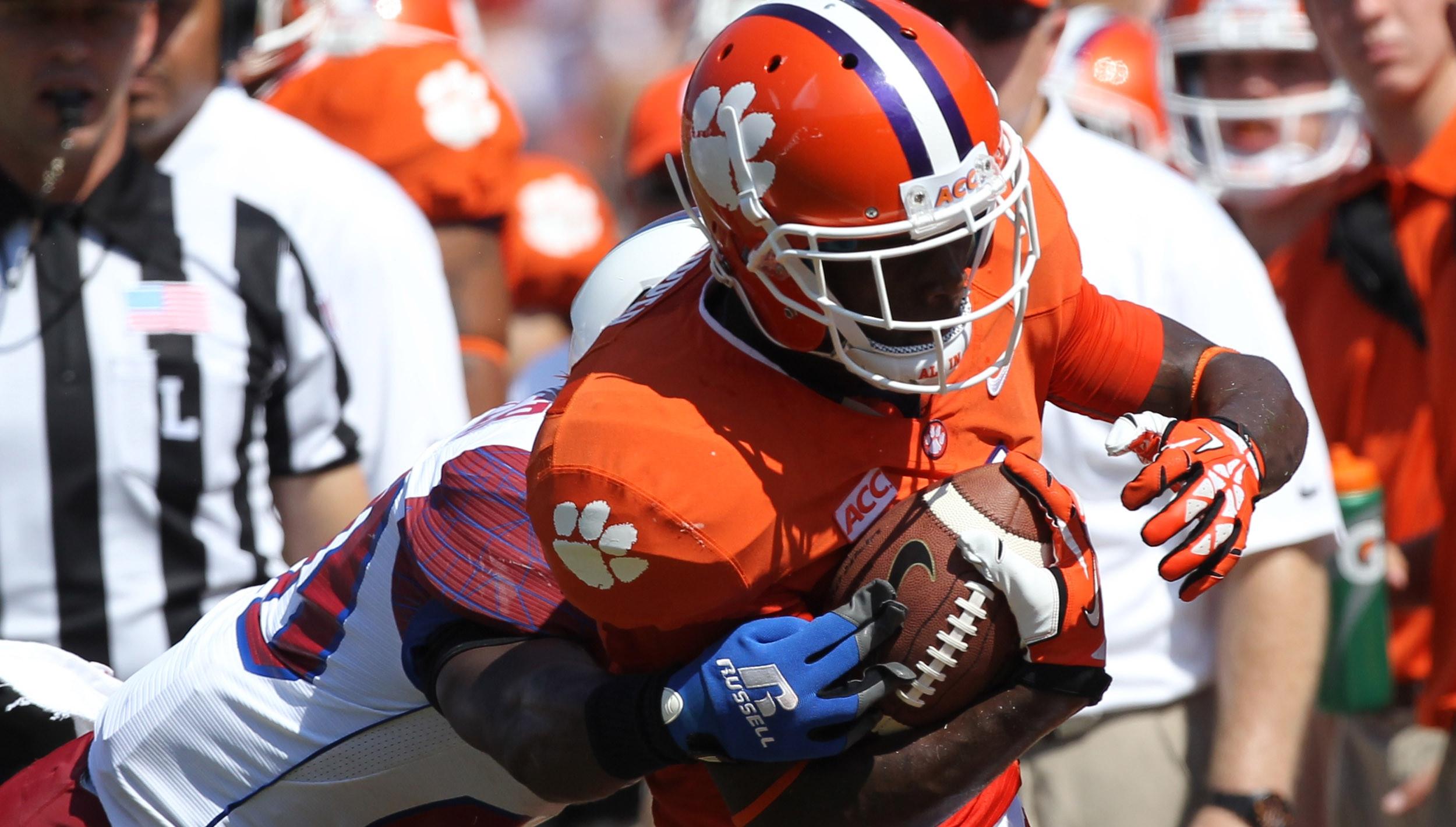 GREENSBORO, NC – Miami’s Denzel Perryman, who led the defensive effort in Saturday’s 21-16 win over 12th-ranked Florida, has been named the Atlantic Coast Conference Linebacker of the Week.

Perryman, who piled up 13 tackles and forced a fumble, led a Hurricane defense that came up with five turnovers in the key nonconference win. The Hurricanes (2-0) entered the Associated Press national rankings this week at No. 15 and are ranked No. 18 in the USA Today Coaches Poll.

Perryman is one of two Miami players recognized this week and headlines a list of nine honorees announced by the conference on Monday. Among the others recognized are Boston College running back Andre Williams, who rushed for a career-high 204 yards as the Eagles defeated Wake Forest in last Friday night’s ACC opener, as ACC Offensive Back of the Week. NC State kicker Niklas Sade, who is perfect on all seven of his field goal tries this season, is the ACC Specialist of the Week.

Joining Perryman, Williams and Sade as honorees are North Carolina’s James Hurst as ACC Offensive Lineman of the Week, Maryland’s Stefon Diggs as ACC Receiver of the Week, Miami’s Anthony Chickillo and NC State’s Art Norman as ACC Co-Defensive Linemen of the Week, Boston College’s Bryce Jones as ACC Defensive Back of the Week and Clemson’s Germone Hopper as ACC Rookie of the Week.

ROOKIE – Germone Hopper, Clemson, Fr. WR, 6-0, 175, Charlotte, N.C.Hopper had six receptions for 66 yards and two touchdowns in Clemson’s 52-13 win over South Carolina State.  He had TD catches of 17 and 26 yards on passes from QB Cole Stoudt. Hopper is the first Tiger freshman to catch two TD passes in a game since Sammy Watkins did it on multiple occasions in 2011. Hopper led Clemson in catches and reception yards in Saturday’s 39-point win.

OFFENSIVE BACK – Andre Williams, Sr., RB, Boston College, 6-0, 227, Schnecksville, Pa.Williams  rushed 35 times for a career-high 204 yards and one touchdown in Boston College’s 24-10 ACC home victory over Wake Forest on Friday night at Alumni Stadium, marking his second straight 100-plus yard rushing performance this season and the seventh of his 36-game collegiate career.  His 204 yards on the ground surpassed Williams’ previous rushing high of 191 yards on Oct. 6, 2012 at Army and marked the first Boston College tailback to rush for 200 or more yards since Rolandan Finch recorded 243 yards against Maryland in 2011.  Williams’ 204 yards in a single game ranks 12th on the school’s all-time list. Through two games, the senior running back leads the ACC in rushing attempts (58), rushing yards (318) and yards per game (159.0). Williams ranks fourth among all running backs in the nation in rushing yards per game.

RECEIVER – Stefon Diggs, Maryland, So., WR, 6-1, 185, Gaithersburg, Md.Diggs caught six passes for a career-best 179 yards and one touchdown in Saturday’s 47-10 win over Old Dominion. His touchdown reception was a 41-yard sprint down the sidelines. On the season, Diggs is averaging 25.2 yards per catch. Diggs’ 179 yards are the most by a Maryland receiver since Torrey Smith had 224 against NC State on Nov. 27, 2010. Diggs now has 1,125 career receiving yards, which ranks 21st in Maryland history.

CO-DEFENSIVE LINEMAN – Anthony Chickillo, Miami, Jr., DE, 6-4, 269, Tampa, Fla.Chickillo made his 23rd consecutive start along defensive line in Saturday’s game against Florida. He made five tackles – three solo – with a sack and tackle for loss in Miami’s 21-16 upset win over the Gators. Chickillo was part of defense that forced five Florida turnovers. He has 10 tackles, 2.0 sacks and 2.0 tackles for loss through the season’s first two games

CO-DEFENSIVE LINEMAN – Art Norman, NC State, Jr., DE, 6-0, 243, Stone Mountain, Ga.Norman recovered a fumble in the third quarter at the Richmond yard line to set up the score that pulled the Wolfpack within one point in an eventual 23-21 victory. On Richmond’s next series, he tallied a 10-yard sack and caused a fumble.  Richmond was sacked just five times all of last season. Norman also had a quarterback pressure and four other tackles in the contest while playing 54 snaps.

LINEBACKER -Denzel Perryman, Miami, Jr., LB, 6-0, 236, Coral Cables, Fla.Perryman tallied a team- and season-high 13 tackles, including a game-high nine solo stops in Miami’s 21-16 upset win over No. 12 Florida on Saturday. Perryman was part of a defense that forced five Florida turnovers, including four in the red zone. Perryman forced a fumble for the first of the five turnovers and added a quarterback hurry.

DEFENSIVE BACK – Bryce Jones, Boston College, Jr., DB, 6-1, 166, University Heights, OhioJones finished the game with two solo tackles, one interception and one fumble recovery in Boston College’s 24-10 ACC home victory over Wake Forest on Friday night at Alumni Stadium. He recovered a quarterback fumble on the Demon Deacons 22-yardl ine that set up a Chase Rettig-to-Spiffy Evans touchdown pass on the ensuing play that lifted the Eagles to a 17-7 lead in the second quarter, then recorded his second interception in as many games late in the second quarter.  Jones interception halted a three-play, 35-yard drive that started with 1:56 left in the half.

SPECIALIST – Nilkas Sade, NC State, Jr., PK, 6-3, 212, Wake Forest, N.C.Sade hit all three of his field goal attempts in Saturday night’s 23-21 win over Richmond and is now 7-for-7 for the season. Sade is tied for the national lead in field goals made, ranks ninth in scoring and second in kick scoring. Sade’s final field goal on Saturday night was the game-winning kick in the win over Richmond with 33 seconds left on the clock – a 48-yarder which was the second-longest of his career. All six of his kickoffs in the win over the Spiders were touchbacks. Sade was also named a Lou Groza Award National Star of the Week for the second straight week.