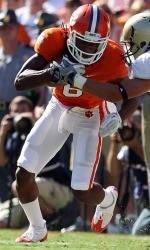 Hopkins Steps Up With the Ball, Without

CLEMSON, SC – As he was walking out of the locker room prior to Saturday’s 35-27 victory over Wofford, Clemson wide receiver DeAndre Hopkins told Offensive Coordinator Chad Morris he was going to like watching him on film this week.

Following the Tigers’ Week 1 victory over Troy, Morris challenged Hopkins as well as some other veteran receivers to show him a little more play with the ball against Wofford than they did in the opener against Troy. It is all part of the high standards set by Clemson’s first-year offensive coordinator.

Hopkins did his job and then some on Saturday. Besides catching a team-high five passes for 73 yards, including a 17-yard touchdown in the fourth quarter, the sophomore also played well away from the football, setting the edge on several of Andre Ellington’s runs.

Hopkins helped Ellington rush for 165 yards, the second best of his career and just one yard from his career high.

“All of us, I think, proved we can be physical without the ball today.” Hopkins, along with Jaron Brown, Sammy Watkins and Martavis Bryant, did prove that. Clemson rushed for 215 yards on 42 carries and Morris credited their downfield blocking as part of the Tigers’ success.

“I challenged them this week. You are either going to come out and play physical without the football or you are going to sit over there with us. When that happens, you will see some veteran guys step forward, and I think you saw that here today.”

Though he is not what you will call a veteran guy, Hopkins, a sophomore, definitely stepped forward. Besides his touchdown catch, he also made a huge 13-yard reception on a third-down pass from Tajh Boyd that kept the Tigers’ last scoring drive alive. Boyd said that play was all Hopkins.

“We have several guys who can spark this team, and sometimes we need that spark,” the Clemson quarterback said. “I think that was a play in which (DeAndre) gave us that spark.”

He also made a nice diving grab on a two-point conversion which tied the score at 21-21 at the break.

“The veteran players have been in that situation. We know how it is,” he said. “When your number is called and you don’t make a play, you may not get that chance again.

“We know how important it is to make plays like that. I think the younger guys are coming along and they are doing the same. I’m just glad I was able to come in and make those plays when my teammates needed me too.”