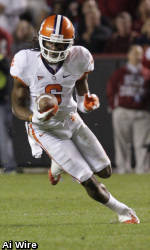 CLEMSON, SC – DeAndre Hopkins, the second leading receiver on Clemson’s ACC Championship football team, was injured in an auto accident Tuesday morning and did not accompany the Clemson team to Miami.

The sophomore from Central, SC was driving from his home to Memorial Stadium to meet his teammates for the bus ride to the airport to board the plane that took the Tigers to Miami for the Discover Orange Bowl. Steady rain was blanketing the area during the time of the accident.

Hopkins suffered a mild concussion in the accident, but does not have any other serious injuries.

“First of all, we are relieved that DeAndre is going to be all right,” said Clemson Head Coach Dabo Swinney. “He is lucky. We are told he does not have any serious injuries and we hope to have him join us soon. Obviously, DeAndre is one of the main parts of our offense and this would be a big loss if he is not able to play.

“But, it is too soon to speculate one way or another on his status for the game eight days from now.”

Hopkins has 62 receptions for 871 yards and four touchdowns this season. He is second to Sammy Watkins on the Clemson team in receptions and reception yards. He had 52 receptions last year and is one of just two receivers in ACC history with at least 50 catches as a freshman and a sophomore. He had nine catches for 157 yards this year in the win over North Carolina, the most reception yards in a game by a Clemson player this year. He also serves as Clemson’s punt returner.