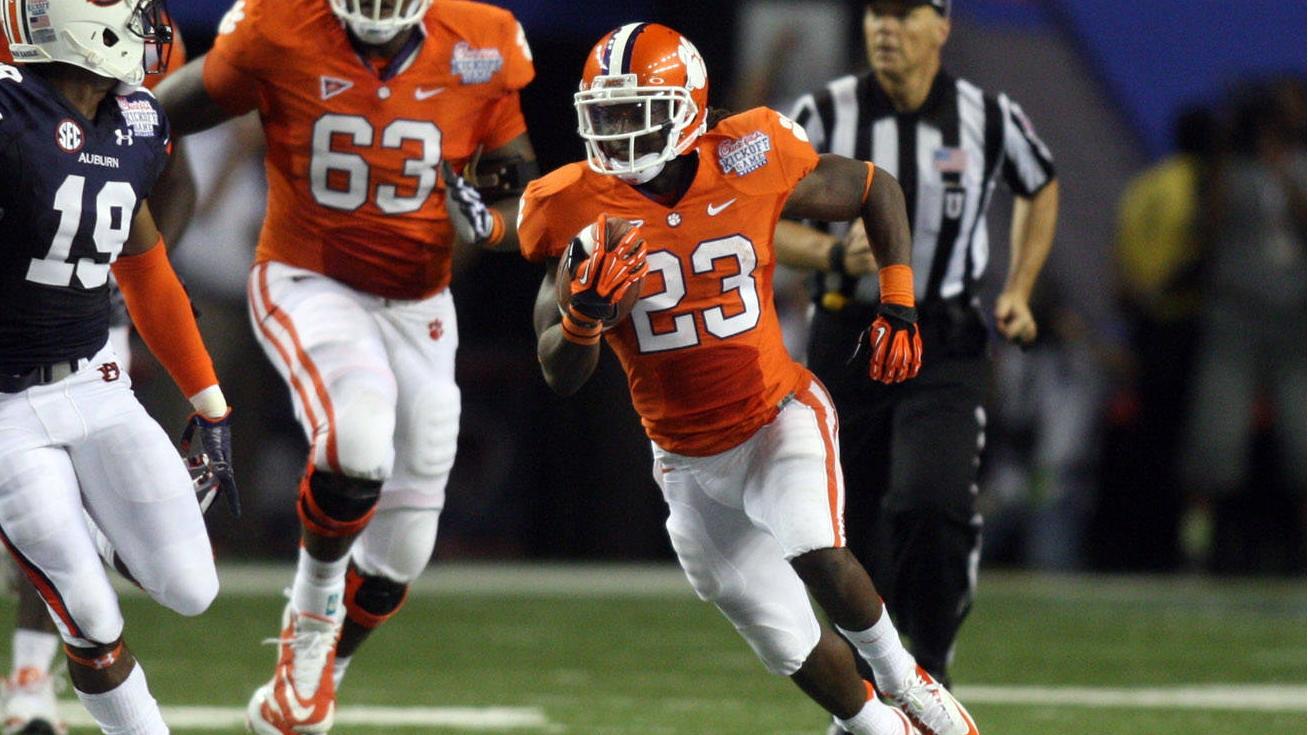 Even as Auburn cornerback Chris Davis was being flagged for interfering with him, Hopkins hauled in a Tajh Boyd pass on a fade route in the back of the end zone for his 12th catch of the game to put No. 14 Clemson ahead for good in its 26-19 win in the Chick-fil-A Kickoff Game in the Georgia Dome on Saturday.

“It was man on man. Tajh trusted me, and I trusted him to put the ball on the money – and he did.”

Hopkins nabbed his 13th catch of the night later in the fourth quarter to break the school record for receptions, which was previously held by Airese Currie, and finished with 119 yards in the season-opening victory.

Perhaps matching Hopkins’ great effort was senior running back Andre Ellington, who rushed for 231 yards on 26 carries as the Tigers of the ACC beat the Tigers of the SEC in the rubber match of the teams’ recent three-game series.

“Auburn’s got a great football team,” Clemson Head Coach Dabo Swinney said. “I was impressed with their running game. I have no doubt they’ll have an incredible season. It’s been a tough series the last three years.”

Hopkins’ grab put Clemson (1-0) ahead 23-19, and Chandler Catanzaro‘s fourth field goal of the night from 18 yards out with 1:24 to play provided the final margin. The Tigers’ 79-yard drive that set up Catanzaro’s kick was highlighted by a 45-yard jaunt by Ellington that put him over the 200-yard mark and helped ice the victory.

Ellington’s career-high 231 rushing yards rank as the fifth most in a single game in Clemson history and the most since C.J. Spiller had 233 in the 2009 ACC title game.

“There’s no doubt in my mind who the best player underneath this roof was tonight – without a doubt it was Andre Ellington,” Clemson Offensive Coordinator Chad Morris said. “He was on a mission. He was relentless.”

Catanzaro opened the scoring with a 24-yard field goal with 5:22 to go in the first quarter. Hopkins had four catches for 60 yards on that drive, including a 24-yard connection on third-and-10 from Boyd that jumpstarted the march.

Auburn responded quickly, however, as Kiehl Frazier found Emory Blake all alone beyond the Clemson secondary for a 54-yard scoring strike on the ensuing possession.

But Clemson senior Jonathan Willard‘s fumble recovery at his own 46 helped set up another Catanzaro kick, this time from 40 yards, which made the score 7-6 early in the second quarter.

Clemson regained the advantage at 13-7, as Roderick McDowell scored the Tigers’ first touchdown of the season on a seven-yard burst. McDowell’s run was set up by Ellington’s 68-yard run on the previous play.

After Rashard Hall‘s leaping interception gave Clemson the ball at its 15, Ellington burst free down the sideline, but appeared corralled after just picking up a first down. Instead, Ellington kept his balance, cut completely across the field and followed his blocking down deep into Auburn territory.

Cody Parkey trimmed Clemson’s lead to 13-10 on the ensuing possession with a 37-yard field goal to cap a 12-play, 55-yard drive and provide the halftime score.

Another Parkey field goal opened the second-half scoring and tied the game 13-13, but Catanzaro put Clemson back on top on its ensuing possession, capping off a 13-play, 66-yard drive with a 37-yard field goal.

Boyd spun out of a sack on a third-and-10 play at the Auburn 30 that helped keep the drive alive and keep the Tigers in field goal range.

“That’s where Tajh Boyd changed the game,” Auburn Head Coach Gene Chizik said. “We had him in our grasp several times, but he made fantastic plays to get those first downs and keep the chains moving.”

After a turnover set up the Tigers of the SEC at the Clemson 35, Parkey gave Auburn its first lead since midway through the second quarter with a 36-yarder from the left hash to make the score 19-16 with 12:50 to go.

On the ensuing drive, after six straight running plays set Clemson up with first-and-goal at the four, Boyd found Hopkins in the back of the end zone for what proved to be the game-winning score.

Catanzaro provided the final margin with an 18-yard field goal. The junior was a perfect four-for-four on field goals on the night, running his tally to a streak of 12-for-12 over a span of the last six games.

The Tigers finished off the win by stopping Auburn on downs, with sophomore end Vic Beasley notching a sack of Auburn’s Frazier on third down to key the stop. Frazier’s final pass then fell harmlessly incomplete as time expired.

“We have to give Clemson a lot of credit,” Chizik said. “They played a good football game tonight – hard fought on both sides. They are an extremely talented team, and they did a great job coaching.”

“This was a stepping stone – another great win for this team and this program – and we’ve just got to keep building off of it,” Boyd said.