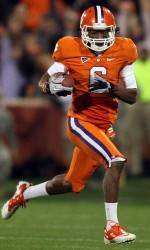 Hopkins is Clemson’s top receiver this year with 43 receptions for 532 yards and four touchdowns. Those statistics include 25 receptions for 346 yards over the last four games of the season. He had 8-106 against Florida State and 7-124 against South Carolina. His 124 receiving yards were the most by a Clemson player under Dabo Swinney.

Hopkins’ reception total and yardage total rank as the most in school history by a true freshman, and third best by any freshman. His four touchdown receptions rank in a tie for first in Clemson history by a freshman.

Christian started seven of Clemson’s 12 games this year and finished the regular season with 24 tackles, including 1.5 tackles for loss. He had a season high five tackles at North Carolina and contributed four stops in the win over Georgia Tech in 54 tackles as a starter.