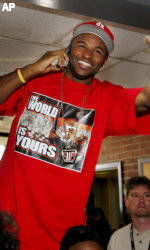 Clemson, SC- Clemson graduate Tye Hill was taken in the first round of the NFL draft by the St. Louis Rams on Saturday afternoon at 2:34 PM.

Here are some notes on Hill’s selection:

Hill was the first Clemson player to be drafted in the firstround since Rod Gardner was taken in the first round with the #15selection by the Washington Redskins in the 2001 draft. Hill wasactually the fourth Clemson player to be taken with the #15 draftchoice of the first round in the last 14 years. Wayne Simmons(Green Bay Packers, 1993), Anthony Simmons (Seattle Seahawks, 1998)and Gardner (Washington Redskins, 2001) are the others to be takenat the #15 slot since 1993. When Hill had his press conference topreview the NFL draft in Clemson last Tuesday, he came to themeeting at the McFadden Auditorium on the Clemson campus wearing aSt. Louis Cardinals baseball cap. Hill was the 15th pick of thedraft, but the first cornerback taken. Hill was Clemson’s 20thfirst round draft choice in history and is the highest draft choiceby a Clemson player since Gardner was the #15 choice in 2001. Hillis the third Clemson cornerback in school history to be taken inthe first round. Donnell Woolford was the #11 selection of theentire draft by the Chicago Bears in 1989 and Antwan Edwards wasthe #25 selection of the entire draft by the Green Bay Packers in1999. The highest selection by a Clemson defensive back is the #10selection in the 1983 draft by Terry Kinard, who was a free safety.Hill was the first cornerback taken in the first round by the Ramssince Todd Lyght was a first-round pick by the Rams out of NotreDame in 1991. Hill was the first Clemson player taken in the draftin any round by the Rams since 1998 when Glen Rountree was a sixthround selection. Hill will have a strong chance to become the firstformer Tiger in the Rams roster since the 2002 season when DexterMcCleon was a starting cornerback for that franchise. McCleon wastaken in the second round, the 40th overall selection by the Ramsin the 1997 draft. McCleon played six years with the Rams (1997-02)and was a member of the team’s Super Bowl Championship squad in1999 and also played in another Super Bowl with that club just twoyears later. Seven former Tigers have played with the Ramsfranchise over the years dating to Don Chuy, an offensive linemanwho played with the club from 1963-68. Two of the seven have beencornerbacks (Dexter Davis, 1993-95) and McCleon (1997-02). Otherformer Tigers to play for the Rams include Lou Cordileone (1962),Steve Fuller (1983), Dale Hatcher (1985-89, 1991) and Tony Horne(1998-00). Tye Hill is the second Tiger named Hill to be drafted byan NFL team in the last two years. Tye Hill and LeRoy Hill werestarters together on the Clemson defense in 2003 and 2004, but theyare not related. Clemson has now had 11 players drafted since TommyBowden became the head coach prior to the 1999 season. Eight of the11 have been defensive players. Charlie Whitehurst, Clemson’sstarting quarterback the last four years, is also expected to beselected in the 2006 NFL draft. All 10 of the previous Tigers to bedrafted under Bowden have made an NFL roster and eight of the 10have appeared in an NFL game. Donnell Washington (Green BayPackers) and Airese Currie (Chicago Bears) have been on injuredlists and have not appeared in a game yet.

Hill was one of 12 ACC players taken in the first round of thedraft, the most by one conference in draft history according toESPN. There were 15 ACC players taken in the first 37 picks,including 13 defensive players. No wonder no ACC team ranked in thetop 50 in the nation in total offense in 2005. Ten of the 12 ACCplayers who were chosen in the first round were defensive players.Clemson should take pride in its performances this year againstFlorida State and NC State. Clemson scored 35 points againstFlorida State and its defense that had four first round draftchoices (only three played vs. the Tigers) in the 35-14 win overthe Seminoles this year. Clemson defeated NC State and its threefirst round draft choices on defense in the Tigers 31-10 win inRaleigh this year. It was the most points scored against FloridaState and NC State all season.