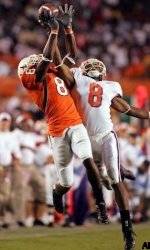 Headlining the offensive squad is the 2005 Walter Camp Player of the Year Reggie Bush, a junior running back from USC. A 6-foot, 200-pounder from Spring Valley, Calif., Bush has rushed for 1,658 yards and scored 18 touchdowns (15 rushing, 3 receiving) for the undefeated and top-ranked Trojans (12-0).

Joining Bush in the offensive backfield is USC teammate and quarterback Matt Leinart, a repeat Walter Camp All-America selection. Leinart, the 2004 Walter Camp Player of the Year, has passed for 3,450 yards and 27 touchdowns this season. A trio from the Pac-10 Conference – wide receivers Dwayne Jarrett (USC) and Mike Hass (Oregon State) and tight end Marcedes Lewis (UCLA) – also made the team.

On the offensive interior, seniors Marcus McNeill (Auburn), Eric Winston (Miami), Max Jean-Gilles (Georgia) and junior Jonathan Scott (Texas) earned All-America honors, while senior Greg Eslinger (Minnesota) is the center. The place kicker is Mason Crosby (Colorado). Crosby has connected on 21-of-28 field goals this season, including 5-of-6 from 50 yards or more.

The punter on the team is senior Ryan Plackemeier (Wake Forest), who leads the nation with a 47.2 yard per punt average, and the kick returner is junior Maurice Drew (UCLA), who has returned three punts for touchdowns this season.

The Walter Camp All-America team is selected by the head coaches and sports information directors of the 119 Division 1-A football schools and certified by UHY Advisors, a New Haven-based accounting firm. Walter Camp Football Foundation President Allen Jackson was pleased with the voting participation.

“We had 86 percent of the 1-A schools participate in this year’s voting,” Jackson said. “We are very appreciative of the cooperation of the coaches and SIDs in our effort to honor the most outstanding college players each and every season.”

Walter Camp, “The Father of American Football,” first selected an All-America team in 1889. Camp – a former Yale University athlete and football coach – is also credited with developing play from scrimmage, set plays, the numerical assessment of goals and tries and the restriction of play to eleven men per side. The Walter Camp Football Foundation – a New Haven based all-volunteer group – was founded in 1967 to perpetuate the ideals of Camp and to continue the tradition of selecting annually an All-America team.

Members of the 2005 Walter Camp All-America team will be honored at the organization’s national awards banquet on February 11, 2006 at the Yale University Commons in New Haven. Please call (203) 288-CAMP for tickets.