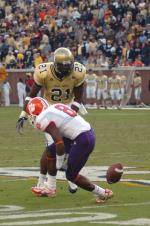 Clemson cornerback Tye Hill is among 12 semifinalists for the Jim Thorpe Award. The list was announced on Tuesday. Hill has three interceptions, eight passes defensed and 47 tackles so far this season. He has five tackles for loss among the 47 tackles.

This marks the second consecutive year a Clemson cornerback has reached the final 12 of the Thorpe List. Justin Miller, now with the New York Jets, was named to the final 12 last yaer.

This list will be narrowed on November 21, 2005, to three finalists. The winner will be announced on ESPN’s College Football Awards Show, telecast llive from Disney World in Orlando, Florida, on December 8, 2005.

The Jim Thorpe Association first presented the award in 1986 to Thomas Everett of Baylor. The 1989 winner, Marc Carrier of USC, will present the Thorpe trophy on this year’s ESPN show. The official presentation of the award will be at a banquet in Oklahoma City on February 7, 2006. Winners are selected for performance on the field, athletic ability and character. Last year’s winner was Auburn University standout Carlos Rogers, who is now playing for the Washington Redskins.