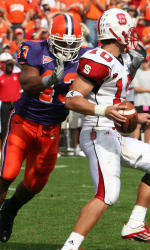 Hill tied for the ACC lead in tackles for loss (19) and moved into a tie for fifth place in Clemson history in that category (48). He had at least one tackle for loss in every game this year and had a streak of 13 straight games with a tackle for loss dating back to 2003. Hill recorded a sack in seven of 11 games in 2004 and tied a Clemson record by recording at least one sack in five consecutive games. He had seven double-digit tackle games in 2004, leading Clemson with 106 total tackles.

His 13.04 punt return average ranked 19th nationally. Miller joined Miami’s Devin Hester and USC’s Reggie Bush as the only players in the nation to rank in the top 20 nationally in both kickoff and punt returns.

Miller is the first return specialist in Clemson history to be selected as an All-American and the first special teams player to be named All-American since placekicker Nelson Welch in 1992. Clemson’s tradition of All-America special team’s players includes Welch, Chris Gardocki, David Treadwell, Donald Igwebuike, Dale Hatcher and Obed Ariri.