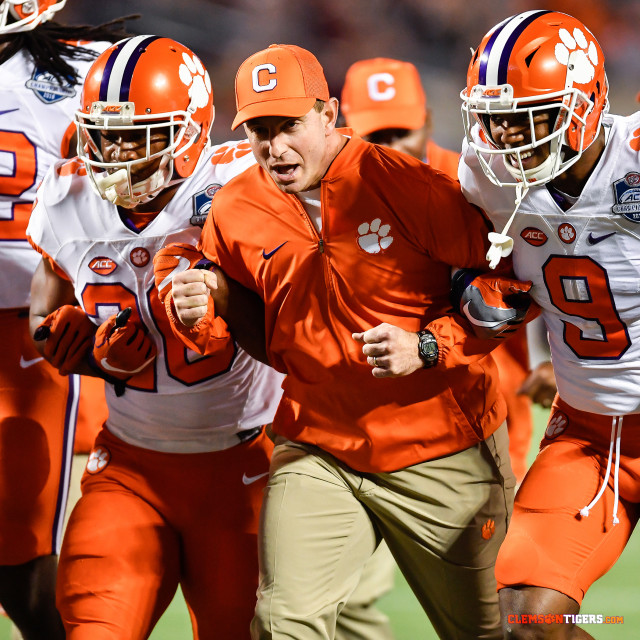 Clemson, S.C.—Tee Higgins had touchdown receptions from two different quarterbacks and Trayvon Mullen had two interceptions, including an 84-yard return for a touchdown to lead the Orange team to a 28-17 victory over the White team in the annual Clemson Spring Football game at Memorial Stadium.   The game concluded the Spring Practice session for Dabo Swinney’s Tigers.

A crowd of 55,000, plus a national television audience on ESPN watched the contest that was played in 75 degree sunshine.

“I really want to thank the crowd for coming out today,” said Swinney in his initial postgame comments. “Today was big because it is the closest we have to a real game in terms of atmosphere in preparation for next season. So many of the young guys took that deep breath of experience.

“It was also great to showcase our programs to recruits and on ESPN to the nation.

Higgins scored two touchdowns in the first quarter, one on a 50-yard pass from freshman quarterback Trevor Lawrence and later on an 18-yard pass from Hunter Johnson.   Higgins finished the game with four receptions for 118 yards and all the catches came in the first period

The White team closed the gap to 14-10 by halftime on a 37-yard field goal by Alex Spence and an eight yard touchdown run by Travis Etienne.

Johnson then scored on a three-yard run on the Orange team’s first possession of the third period to take a 21-10 lead.   Mullen then put the game out of reach when he had an 84-yard interception return for a touchdown with just 7:30 left.

The White team scored on a 50-yard touchdown pass from Chase Brice to Diondre Overton with 4:18 left to make the final 28-17.

“I thought it was a competitive game,” said Swinney. “The turnovers were big, one early that led to the second orange touchdown and then Trayvon Mullen’s interception late.

“I thought a lot of players made big plays. It is interesting to evaluate when you divide the team equally for this game. You have guys playing on the same team who don’t play together much all spring. It is a good evaluation.

“I thought Justin Foster had a good day with two sacks and some other big plays. Tee Higgins was unbelievable. Trevion Thompson has been making plays all spring.   Amari Rodgers made some plays in the return games (35 yard kickoff return, 27-yad punt return). It was great to see Greg Huegel out there as well.

As is the case with most schools during spring practice, the game was played with a two-hand-touch rule as far as stopping the quarterback. That rule led to 12 sacks overall by the Clemson defense. Christian Wilkins was a top defensive player with six tackles, two sacks and four tackles for loss. The 300-pounder played safety for a few plays on the last drive of the game and made a tackle from that position.

K.J. Henry and Xavier Thomas, both freshmen who entered Clemson in January, had two sacks apiece. Henry finished with four tackles. Justin Foster also had a pair of sacks, while Xavier Kelly had two tackles for loss. Baylon Spector was the top tackler in the game with eight for the White team, while James Skalski led the Orange team with seven stops.

In addition to Mullen’s two picks and a pass break up, K’von Wallace had an interception return for 46 yards and A.J. Terrell had one interception.  Jalen Williams had the only fumble recovery.

Brice led the quarterbacks in terms of yardage with 231 on 12-19 passes, but he threw three interceptions. Trevor Lawrence was 11-16 for 122 yards and a score for the Orange team.  Seventy-three of those yards came on his first drive. Hunter Johnson was 8-14 for 85 yards and a score. Kelly Bryant was 8-15 for 35 yards.

Travis Etienne was the top rusher with 8-42 and a touchdown. Ty Thomason led the Orange team with three carries for 40 yards.

The White team allowed just 39 yards rushing on 29 attempts, but lost the game

While Higgins led the Orange team with 118 yards receiving, Trevion Thompson had 4-76 receiving to lead the White team. Overton had just three catches but had 71 receiving yards. Senior Hunter Renfrow had 3-56