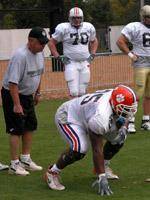 Henry, Vaughn To Play In The Villages Gridiron Classic

Clemson offensive tackle William Henry and defensive end Khaleed Vaughn will join other players from the ACC at The Villages Gridiron Classic, director Matthew Sign announced. Joining the players from FSU and Maryland will be two players each from Clemson and North Carolina, along with a senior from both Duke and Georgia Tech. The game will be played on January 31, 2004 at 12:00 noon at The Villages Polo Stadium, and will be televised nationally on ESPN.

Henry, a two-year starter at offensive tackle, helped pave the way for an offense that averaged more than 420 yards per game. Vaughn started 12 games at defensive end in 2003, where he tallied 50 tackles, including five for loss and a pair of sacks.