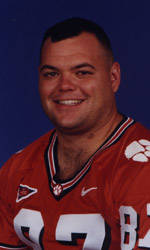 His handicap on the golf course is a five. This past summer he shot his career best round of 70, which was two under par for the course he was playing. During the summer time you can find him on the fairways getting in at least five rounds per week. He has been spotted on the greens at the Master’s at Augusta National picking up tips and tricks from the pros. Last season he attended the NCAA Men’s Golf Championship in Durham, NC, to support close friend, Clemson All-American golfer, John Engler. Who is this golf connoisseur walking around the Clemson campus? He is Henry Owen, the long snapper for the Clemson University Tigers football team.

That is right, the football team. Owen has the lowest handicap of any Tiger football player since Scott Beville, who coincidentally, was Clemson’s long snapper between 1988 and 1990. Although he seems to have what it takes to play golf at the collegiate level, Owen is in his fourth season as the first-team long snapper for the Clemson football team. Entering today’s game, Owen has snapped in 37 consecutive games for the Tigers.

Owen, a senior from Clover, SC, is a marketing major at Clemson. His parents, Hank and Kay Owen, both attended Clemson. His father is now an attorney and his mother is a school teacher in Clover. Henry’s sister Katie is a 1999 Clemson graduate. She now lives in Ponte Vedra, FL and works for the ATP, the men’s professional tennis tour. “My family is a big Clemson family, but my parents never pressured me into deciding where I went to school,” Owens said. “They never pressured me into any situations. They were always one to support. They supported my decision to play football here and to go to school here, and it’s worked out for the best.”

Owen grew up playing both football and golf. He started playing football as an offensive lineman for the Clover Junior High School team when he was in seventh grade. By his senior year in high school, he was playing running back and linebacker for the Clover Blue Eagles. However, he had been long snapping years before he started playing organized football. In third grade, Owen was a ball boy for the Clover football team. The long snapper for the varsity team taught Owen how to snap at the age of eight, and he has been snapping ever since.

The opportunity to play football for Clemson fell in Owen’s lap. “I kind of got blessed by having a good friend and teammate who was recruited by some big schools,” he said. Owen’s high school friend and Clover varsity football teammate David Haselden, was being recruited heavily by Clemson during his senior year. When Haselden committed to Clemson, coach Reggie Herring contacted Owen and asked if he wanted to try to walk on as a long snapper. Owen jumped at the opportunity to play for Clemson and after a successful walk-on freshman season, was rewarded with a scholarship the following year. When asked about a desire to play other positions, Owen said, “When I got here, I knew specifically that I was just going to be a long snapper. That was the role the coaches wanted me to fill, and it was what they brought me in here for.” Owen has been quite successful in meeting the coaches’ expectations. In the last two years while Owen has been snapping, Clemson has had only one blocked punt. Owen has also been an integral part of the success Clemson has had in punt coverage. The longest punt return against the Tigers during the 2000 season was only 25 yards, and opponents had just 19 punt return yards in the first two games of this season.

Just as rewarding as it is for Owen to snap the game-winning field goal, is the feeling he gets as he splits a narrow fairway and lands on the green in regulation. Owen has enjoyed playing golf since he was young, but it was not until he got to college that his love for the sport became a passion. His freshman year, he was in the same class as Clemson golfer John Engler. The two instantly became good friends. “He (Engler) let me go out on the course and play golf with him. I would tell him about football, so it turned out to be a good trade off.”

During his time at Clemson, Owen has become friends with all the members of the Tiger golf team. “They are some of my really good friends,” he said. “And it’s been a great opportunity to have a chance to play with them.”

One of Owen’s friends is former Clemson golfer Jani Saari, who graduated in May 2001. Saari returned to his home country of Finland, and has been pursuing a professional golf career. Owen has recently spent a lot of time trying to keep up with Saari’s scores. “I look on the website that Jani sends me. I have to search around for his name because the web-sites are written in Finnish. I can only understand Jani’s name, his score, and where he finished that week. The next week Jani will send me an email to let me know how he did so that I can make sure.”

This past summer, Owen had the opportunity not only to play golf, but also to teach it. He worked as a counselor at two youth golf camps. At Gaston Country Club in Gaston, NC, near his home in Clover, Owen worked with five through 10-year-old campers on long irons and drivers. He helped teach the kids fundamentals such as proper stance, grip, and alignment. Owen also worked at Clemson golf coach Larry Penley’s camps. He helped at the station on course management. Owen worked alongside Saari one week and Charles Warren, who is presently on the Buy.com Tour, the next. Of his experiences teaching golf, Owen said, “I really enjoyed working with the kids. They thought it was cool that I played football for Clemson and that I just enjoyed being on the golf course.”

Throughout his career at Clemson, Owen has enjoyed his time on the fairways, however his most memorable moment as a Tiger was snapping the game winning field goal against South Carolina last season. “As soon as I snapped it, I saw Jeff (Scott) put it down, and I saw Aaron (Hunt) kick it,” he remembered. “As soon as I saw him kick the ball I knew it was good. It was just an unbelievable feeling.”

As for the possibility of continuing his football career, Owen said, “I never thought I’d get this far as a long snapper. Playing at the Division I-A college football level, the highest level there is, playing at a great school like Clemson with a great football history has been a great experience. It’s been a dream come true, but I really don’t have any aspirations to go on to the next level and play in the NFL. I probably don’t have the size to compete in the NFL, so it’s nothing I’ve really looked forward to or tried to work towards. I’ve just tried to be the best I can be for the Clemson football team.”

Although he does not plan to pursue a professional career in either sport, there is no doubt that in all future Clemson football reunions that involve golf, Owen will be the first player drafted.

Libby Kehn is a senior from Saline MI and works in the Clemson Sports Information Office.