Elizabeth “Libby” Steadman did not set out to break new ground for women, serve her country in two wars or be enshrined in a museum in Washington, D.C., but most people who lead extraordinary lives do not plan to do so. Making a significant impact often comes naturally.

Steadman grew up in the mid 1950s and 1960s amid peach, corn and cattle farms in Moore, S.C. in what was then a very rural community just south of Spartanburg and east of Greenville. Her father, Bernard, built houses. Her mother, Mary, was a homemaker and part-time substitute schoolteacher.

It was an archetypal childhood for a young American girl when young women in America had limited paths in life, before the revival of feminism in the late 1960s. It was a time when most young girls in the Upstate were encouraged to be either teachers or nurses.

Steadman leaned toward nursing from a very young age, an instinct that eventually led her to groundbreaking heights as a health care worker and soldier.

The journey began when she was a clarinet player for the Dorman High School band and visited Clemson University during a “band day,” when high school bands from all over South Carolina were invited to watch a Tiger football game. The experience was transformative for her. She decided that day she was going to become a Tiger.

When Clemson added a nursing program in 1965, she focused her sights on it. In 1966, she joined the second-ever nursing class at Clemson. 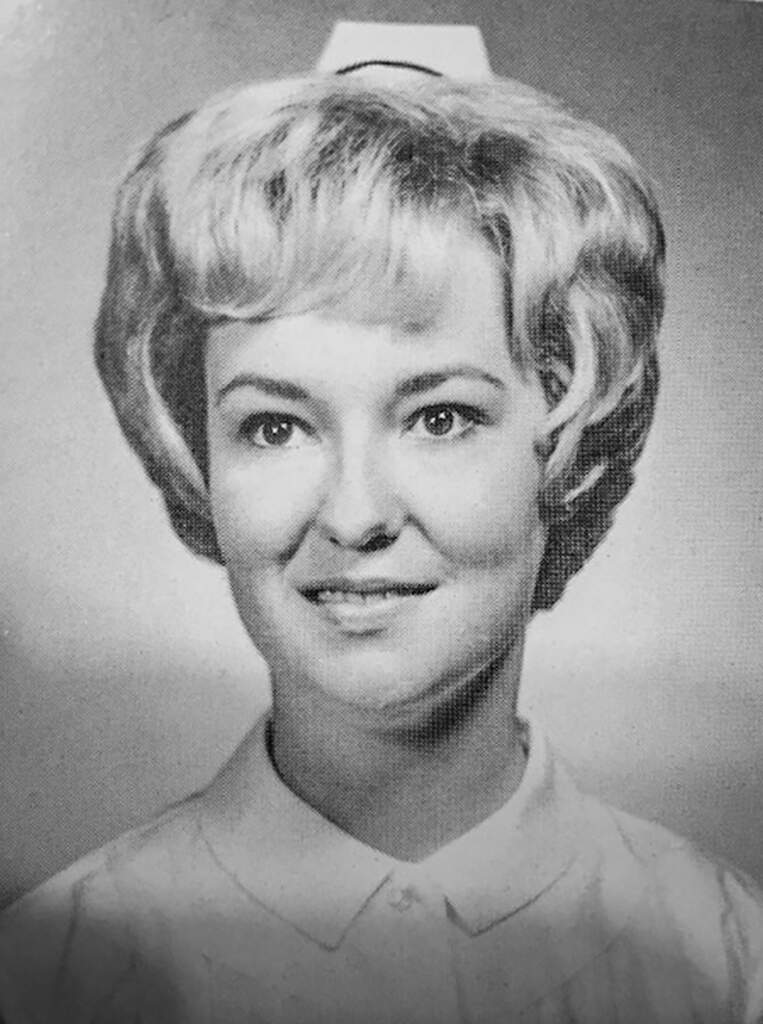 It was the first year Clemson had women’s residence halls on campus. She remembered seeing her fellow students in the Reserve Officers’ Training Corps practicing drill and ceremony on Bowman Field as she walked to and from class. Among them were several groups of women.

“I remember specifically seeing groups of women wearing Air Force uniforms. They were called the Angel Flyers, and they functioned as hostesses for the men’s honorary Air Force society. I thought they were the real thing at the time. They would be out on the parade grounds in their uniforms while we were having class, and I was always envious. I aspired to be like them.”

At the time, the Vietnam War was making headlines almost every day. Steadman would watch the female cadets in their crisp uniforms marching in neat rows across the grass and feel a sharp desire to serve. However, she did not want to put her parents through the stress of their only child going to Vietnam, so she resisted enlisting.

“Of course 20 years later, I put them through two wars when they were much older,” she said with a wry laugh. “I think I spent much of my life doing penance for not going to Vietnam.”

Steadman earned her associate’s degree in nursing in 1968 and went to work in Spartanburg for three years, then to the Medical University of South Carolina in Charleston, where she spent five years in the intensive care unit while working to earn a bachelor’s degree.

In 1974, at the urging of one of her co-workers, Steadman joined the Army Reserve. She worked as a civilian nurse and drilled with Army Reserve hospital units around South Carolina and Georgia, steadily gaining leadership experience and rising up the ranks. 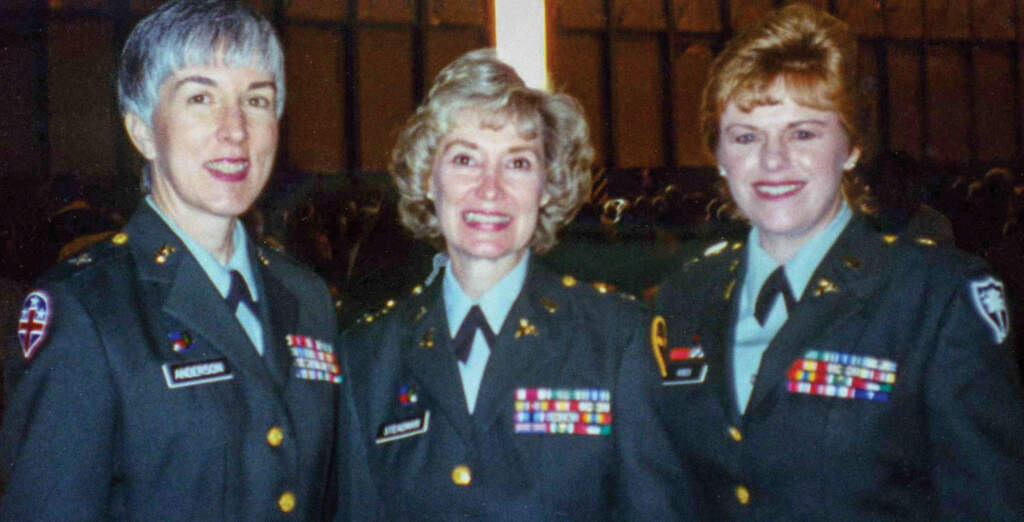 By the time she was sent to Operation Desert Storm in 1990, she was a lieutenant colonel.

“We got to Dummam (Saudi Arabia) a couple of days before the air war started. We sat for 10 days or so at the port waiting for our equipment. While we were waiting there in warehouses, the air war started. I remember our commander saying, ‘Oh don’t worry, they (Scud missiles) can’t reach this far’.”

He was wrong. For the next few weeks, Steadman listened to the Gulf War taking place right over her head.

“We could hear the Patriot missiles launch and then hear them destroy the Scuds. One night, it happened right over us, and we could hear the shrapnel raining down on the roof of the warehouse.”

Steadman’s unit was assigned as the farthest forward MASH, supporting the 3rd Armored Division as it pushed inland. They operated out of tents in the middle of the desert, helping patients who were mostly Iraqi woman and children injured by stepping on unexploded ordinances. 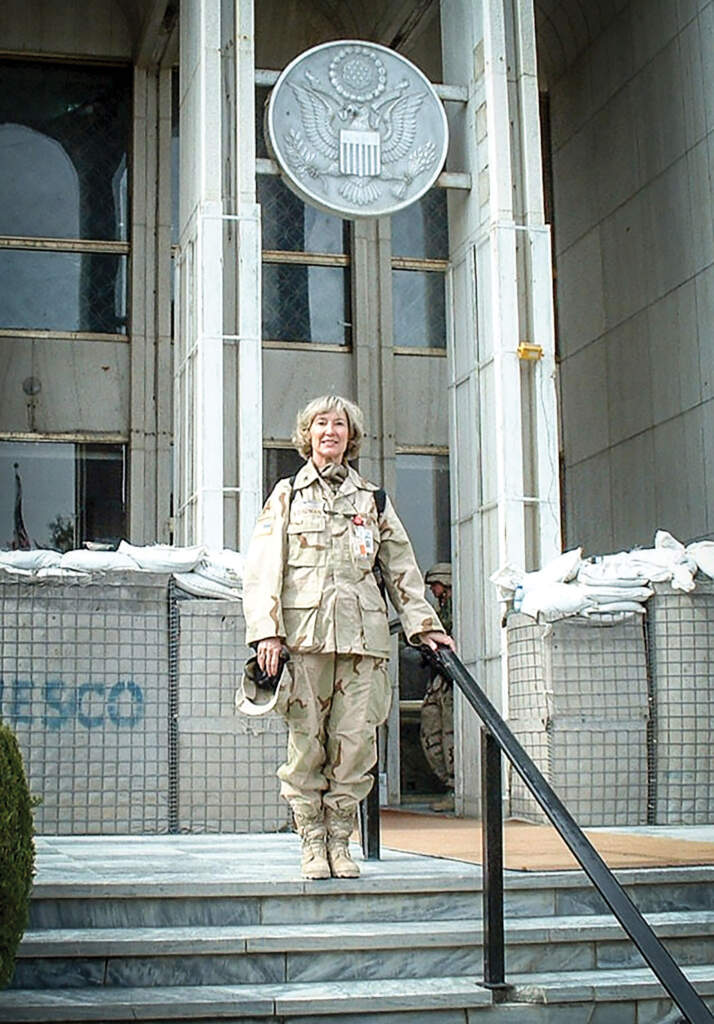 When she came back to the United States, Steadman spent several years teaching the combat trauma nursing course to military units all over the country. In 1995, she became the chief nurse of the 818th Medical Brigade in Atlanta, commanding all Army Reserve medical units in South Carolina and Georgia.

Less than a year after 9/11, Steadman returned to war. This time, she served as part of the 360th Civil Affairs Brigade, attached to the XVIII Airborne Corps, the first major unit to go into Afghanistan after special operations forces. By that time, Steadman had been promoted to colonel, which made her the highest-ranking female service member in Afghanistan at the time.

She remembered how the country was in chaos when they arrived, with no light, electricity or water throughout much of the city, making driving the streets hazardous. Her unit would drive to hospitals around the city in their Army vehicles, always leaving at least one person at the vehicle to post “car guard” while the others went in.

When Steadman had car guard duty, it always attracted attention.

“I’d take my turn and the locals would be in awe seeing a female in uniform. The men and children would encircle me and inch in closer and closer to get a look.

“It wasn’t scary, because it was so interesting. There were always mortar rounds coming into Kabul, but they had terrible aim, so they’d mostly land in the street.” 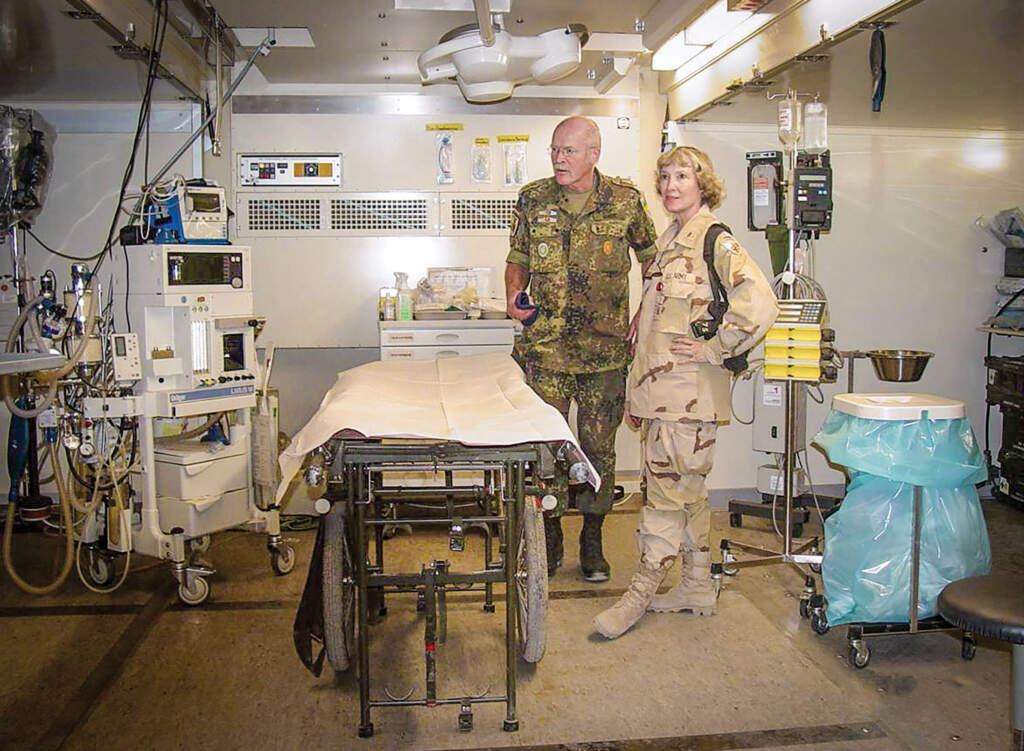 Steadman retired from the Army in 2004 and from MUSC in 2012, but that has not stopped her from serving others. She has spent the last six years volunteering as a primary care provider at a free clinic in Beaufort, S.C.

In 2005, Steadman responded to a request from the Women in Military Service for America Memorial at Arlington National Cemetery, which was preparing to open a section dedicated to military women during the U.S. War on Terror. It is the only major national memorial honoring U.S. servicewomen, and it now displays Steadman’s uniform and pictures as one of the modern pioneers of women who served their country. She is characteristically modest about the honor.

“I am just one among many honored at the memorial,” she said. 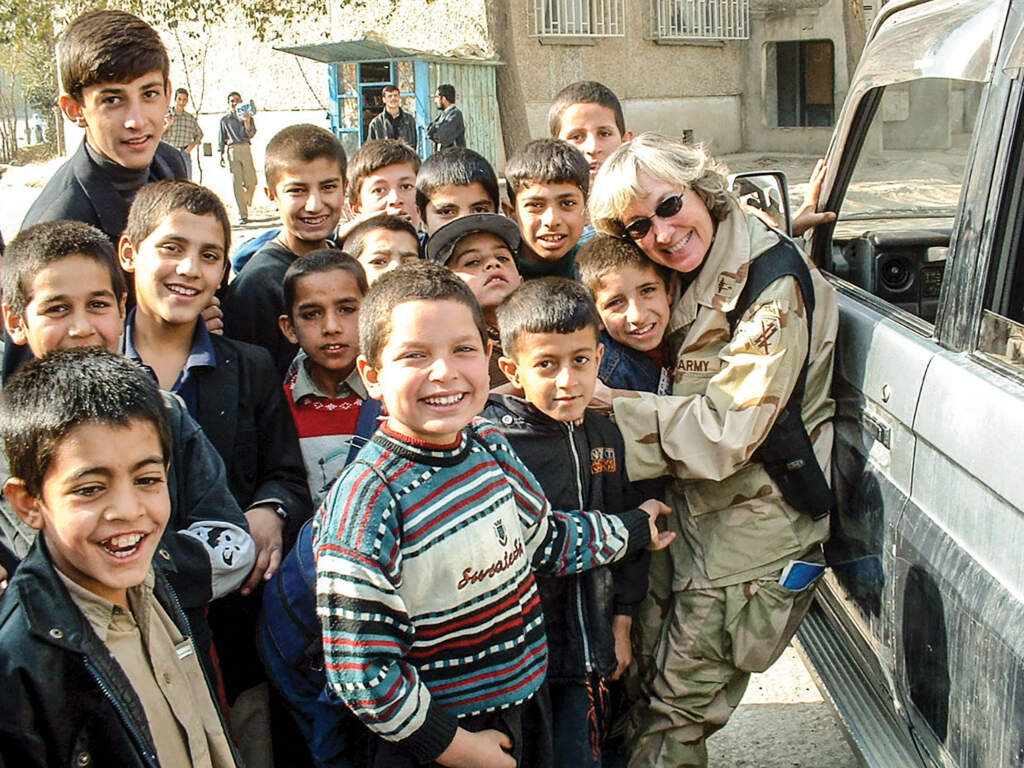 Reflecting on her career in nursing, Steadman marveled at how much the profession has changed since she first stepped onto the Clemson campus as a wide-eyed and hopeful nursing student.

“When I graduated, you could either work in a doctor’s office or in a hospital. Now, if you don’t like bedside nursing, there are so many other things that can be done, and so many opportunities for advancement and education.”

Nursing has been described as “both an art and a science, a heart and a mind,” a sentiment encapsulated in Steadman’s extraordinary career, and she said it all began with choosing the right profession.

“I don’t think there are too many other careers today that have so many different paths. I’m so thankful for all the opportunities nursing has afforded me, and it all started at Clemson.”