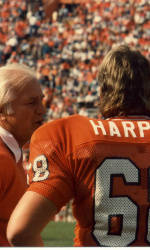 Frisco, TX– Stephen F. Austin head coach J.C. Harper was named the Southland’s coach of the year on Tuesday. SFA earned the Southland’s automatic qualifier for the NCAA playoffs under Harper, who is in his third season at the Nacogdoches, Texas, school.

Harper rebuilt the Lumberjacks from a winless team (0-11) in 2007 to a 4-8 team in 2008 and into a 9-2 team this season, which resulted in a share of the conference championship. This year’s playoff appearance is the first for the Lumberjacks since they reached the national semifinals in 1995.

SFA has the nation’s top-ranked passing and scoring offenses and the third-best total offense. Defense has also played a significant part in the Lumberjacks’ success. They rank fifth in sacks, 16th in passing efficiency defense, 20th in rushing defense and 27th in scoring defense. He is just the second SFA skipper to earn Southland coach of the year laurels. On Monday, Harper was named to the ballot for the Eddie Robinson Award, which goes to the best coach in the FCS.

Harper lettered at Clemson from 1985-88. He was a reserve defensive linemen during his 42-game career when he accumulated 62 total tackles. He was a member of three ACC Championship teams and four bowl teams. The Tigers finished in the final top 20 of the AP poll in 1986, 1987 and 1988. His father, Tom Harper, was Clemson defensive line coach during that time.