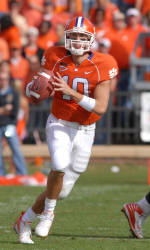 Clemson, SC – Clemson quarterback Cullen Harper has been named the preseason ACC Player of the Year by media who attended the league’s annual Preseason Football Kickoff at Reynolds Plantation in Greensboro, GA. Harper received 34 of the 64 votes submitted by the media attending the event.

Clemson actually had the top three players in the voting for the award, as running back James Davis was second and with 16 votes and running back Michael Dean Perry) and a Clemson offensive player has not been ACC Player of the Year since 1978 when Steve Fuller captured the second of his back to back league player of the year awards.

Harper set 22 Clemson passing records last year when he led the Tigers to a 9-4 record and final top 25 ranking. His list of records included most touchdown passes in a game with five on two occasions, touchdown passes in a season with 27 and best touchdown/interception ratio (27/6). Harper was the second team All-ACC quarterback in 2007 behind Boston College quarterback Matt Ryan, but it was Harper who led the ACC in passing efficiency with a 142.0 figure. He was the first Clemson quarterback to lead the ACC in efficiency since Mike Eppley in 1983.

Harper was joined on the preseason All-ACC offense by teammates James Davis and Aaron Kelly, both of whom were named first-team All-ACC last year as juniors. Davis rushed for 1064 yards and 10 touchdowns last year, while Kelly had 88 receptions, tied for the second most in ACC history, and had 11 touchdowns, tops in the ACC. Davis needs 837 rushing yards in 2008 to become Clemson’s career rushing leader, while Kelly needs just three receptions to become Clemson’s career reception leader. Kelly also needs just three touchdown receptions to break Glenn’s Smith career record of 18, a mark that has stood since 1951.

Spiller did not make the preseason team, but was third in the voting for player of the year. He joins with Davis as Clemson’s “Thunder and Lightning” running back duo. Spiller led Clemson with 1723 all-purpose yards last year, including 768 yards rushing. He was the MVP of the Chick-fil-A Bowl last year when he became the first Clemson player in history to have 100 yards rushing and 100 yards in kickoff returns in the same game.

Michael Hamlin was the only Clemson player to make the preseason All-ACC team on defense. Hamlin led the Clemson defense in forcing turnovers last year with six on four interceptions and two fumble recoveries. He had 97 total tackles to lead Clemson’s defense that ranked in the top 10 in the nation in scoring defense and total defense. Hamlin was a second-team All-ACC selection last year.

Clemson, Florida State and Wake Forest each had four preseason All-ACC selections to lead the conference. Nine of the 12 teams were represented.