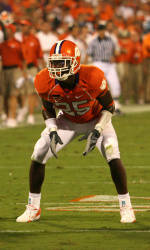 Clemson, SC – Clemson defensive backs Michael Hamlin and Chris Chancellor are both on the preseason “Watch List” for the Jim Thorpe Award. The list of 40 candidates was released on Tuesday the Jim Thorpe Association of Oklahoma City, OK.

Clemson is one of eight schools with at least two players on the list. Oregon leads the way with three, while Clemson, Southern California, South Carolina, Cincinnati, Florida Atlantic, Virginia Tech and Wake Forest all have two apiece.

Hamlin was voted the team defensive captain and MVP of the Clemson defense in 2007 as a junior safety. The native of Timmonsville, SC was a second-team All-ACC selection when he had 97 tackles, four interceptions and 10 passes defensed in 2007. A veteran of 30 starts, he is a major reason Clemson has won at least eight games each of the last three years.

Chancellor tied for the team lead in interceptions last season with four and had 52 tackles from his starting cornerback position. The rising junior had 13 passes defensed overall to lead the team in 2007. He started all 13 games and was a big reason Clemson ranked in the top 10 in the nation in scoring defense and pass efficiency defense.

The Thorpe Award screening committee will select 10-12 semifinalists for the Award in early November, then a list of three finalists will travel to Orlando for the ESPN College Football Awards Show in December. The winner will be announced at that event and will be formally honored in Oklahoma City in February.