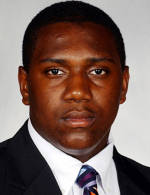 Clemson, SC — Clemson starting left offensive tackle Chris Hairston suffered a bruised knee during a motor scooter accident on Saturday evening and is listed as doubtful for this Saturday’s game with NC State. His status will be updated after practice on Thursday.

Hairston was examined by Clemson’s medical team on Monday and he does not have any structural damage. Hairston’s backup on the depth chart is freshman Landon Walker. If Hairston can’t go and Walker is in the lineup it would mean Clemson would have three freshmen starting on the offensive line.

Preliminary research shows that Clemson has not started three freshmen on the offensive line in the same game since 1943 when the US Government drafted Clemson’s entire junior and senior class for World War II. That year freshmen Ralph Jenkins, Tom Salisbury, Donald Simpson, Pitts Seay and Chick Gainer started the last four games of the season at the five offensive line positions.

Freshman Barry Humphries against The Citadel. Humphries is out at least four to six weeks with a knee injury. Cloy responded with a team best 10.5 knockdown blocks in the win over The Citadel on Saturday. David Smith, a red-shirt freshman from Greenville, SC, is starting at left guard.

Hairston, a sophomore from Winston-Salem, NC, started each of the first two games this year. He was the third most experienced player on the Clemson offensive line entering this year.