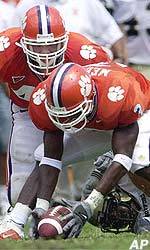 Brian Mance, a 5’11”, 185-pound cornerback from Alcolu, S.C., ranked in the top 30 in the nation in both punt and kickoff returns in 2001. Mance started 11 games last season, recording 48 tackles, three interceptions and seven passes broken up.

Bryant McNeal, a 6’5″, 245-pound defensive end from Swansea, S.C., was named to the watch list after a remarkable junior season in 2001. McNeal finished the year ranked third in the ACC with eight sacks, second in fumbles caused with four and ninth in tackles for loss with 11.

Eric Meekins, a 6’3″, 190-pound free safety from Easley, S.C., finished the 2001 season with 72 total tackles, three tackles for loss, three passes broken up and one interception.

Rodney Thomas, a six-foot, 222-pound linebacker from Cadwell, Ga., finished the 2001 season with 100 total tackles, nine tackles for loss and 15 quarterback pressures. He also recorded three sacks on the campaign.

While the selection committee of the Rotary Gridiron Classic will release its initial watch list before the season begins, the committee will add players not on the initial list as the season progresses.