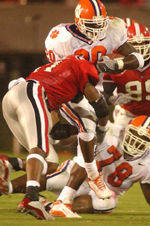 Georgia Renews Series with Clemson in 2013-14

Clemson and Georgia will renew their college football rivalry in 2013 and 2014 with a home-and-home series. Both schools made the announcement Thursday afternoon.

The Clemson vs. Georgia rivalry dates to the 1897 season and the fourth game in Clemson football history. The series took on a national scope in the 1980s when Georgia won the National Championship in 1980 and Clemson won the title in 1981. The two teams split 11 games (5-5-1) between 1978-90. Between 1979-87 the teams played nine games and eight were decided by a touchdown or less. The two teams last played a two-game series in 2002-03 and Georgia won both contests, including a 31-28 victory in Athens in the opener of the 2002 season.

The two-game series calls for Georgia to come to Clemson in 2013 and the Tigers will travel to Athens in 2014. Last week Clemson announced that it had added Vanderbilt to its scheduled for 2012 and 2013. Combined with the annual game with South Carolina, it means Clemson will play three SEC schools out of its four non-conference games in 2013. The Vanderbilt and Georgia games will be at Clemson that year and the Tigers will travel to South Carolina.

“We have been working with Georgia since the NCAA announced Division I teams could add a 12th game,” said Clemson Senior Associate AD Dwight Rainey. “Both schools attempted to work out playing dates earlier than this, but previous commitments prevented it. There is certainly great history between the two programs and it is a very attractive series from a national standpoint.”