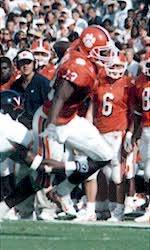 Clemson, S.C. – Clemson senior receiver Rod Gardner has been named one of 10 semifinalists for the Fred Biletnikoff Award. This award is presented annually to the top receiver in college football. The three finalists for the award will be announced November 15 and the winner will be named on December 7 on ESPN.

Gardner is the second Clemson receiver to be named a semifinalist. Tony Horne, now with the St. Louis Rams and a teammate of Gardner in 1997, was named to the final 10 in 1997. Horne had 70 catches that year to set a Clemson record. Gardner broke that mark last year when he had 80 receptions.

So far this year, Gardner has 41 receptions for 747 yards and five touchdowns. He has an 18.2 yards per reception average. Last week he had seven receptions for 182 yards and three scores. He set the Clemson reception yardage mark in that game and tied the touchdown reception mark in Clemson’s 38-24 win over North Carolina.

Over the last three games, Gardner has 22 receptions for 467 yards and three touchdowns. The 467 yards is a Clemson record for three consecutive games. Overall, he holds 10 Clemson receiving records.

Gardner has 149 receptions for his career and obviously needs one catch to become the third player in Clemson history to reach 150. He is just 13 receptions short of tying the Clemson career record of 162 by Terry Smith from 1990-93. He is now third in career catches and fourth in reception yardage. He moved ahead of Tony Horne and Brian Wofford in terms of yardage with his performance against NC State.

He now has 2195 career yards and needs just 29 yards to go ahead of Jerry Butler into third place on the Clemson list. Gardner is also returning kickoffs for the Tigers this season. He had 64 kickoff return yards against NC State, giving him 201 all-purpose running yards in that game. He had 80 against Maryland, giving him back-to-back 200-yard all-purpose running games. He had 231 all-purpose yards against Maryland, 9th highest in Clemson history and most by a Tiger since 1997 when Tony Horne had 267 in a loss to Florida State.