WINSTON-SALEM, N.C. — A stellar outing by quarterback Trevor Lawrence and a Clemson-record 18th career 100-yard rushing performance by running back Travis Etienne led the No. 1 Clemson Tigers (1-0, 1-0 ACC) to a 37-13 victory over the Wake Forest Demon Deacons (0-1, 0-1 ACC) at Truist Field on Saturday. The win marked Clemson’s sixth consecutive 1-0 start to a season and improved Head Coach Dabo Swinney’s week one record to 11-1.

Lawrence finished the game 22-of-28 for 351 yards and a touchdown to go along with two touchdown runs. Wide receiver Amari Rodgers led the way with 90 yards on five receptions. Etienne totaled 102 yards rushing on 17 attempts, including a two-yard touchdown run to go along with his three receptions for 47 yards. With his 18th career 100-yard rushing game, Etienne passed Wayne Gallman (17 from 2014-16) for Clemson’s career 100-yard rushing mark.

On the defensive side of the ball, Winston-Salem native K.J. Henry recorded the first of Clemson’s six sacks on the night. Bryan Bresee recorded a half sack, becoming the first true freshman Tiger to record at least a half sack in a season opener since Dexter Lawrence and Tre Lamar in 2016, a feat also accomplished by fellow true freshman Myles Murphy later in the contest. The defense surrendered its first touchdown with just 2:34 left to play.

Lawrence scored the first touchdown of Clemson’s season for the second straight year on a two-yard rush early in the first quarter, capping a nine-play, 92-yard drive. Rodgers hauled in three passes for 55 yards on the drive. Lawrence would rush for another touchdown, this time for one yard, to give the Tigers a 14-0 lead. This was the junior’s first career game with multiple rushing touchdowns.

Lawrence’s first passing touchdown of the season was a 12-yard strike to tight end J.C. Chalk, the first touchdown reception of Chalk’s career. A 52-yard B.T. Potter field goal as the first half expired sent Clemson into halftime with a 27-0 lead. Potter was a perfect 4/4 on extra points and 3/3 on field goals.

Clemson returns to Death Valley for its home opener next Saturday when it hosts The Citadel at 4 p.m. on ACC Network. 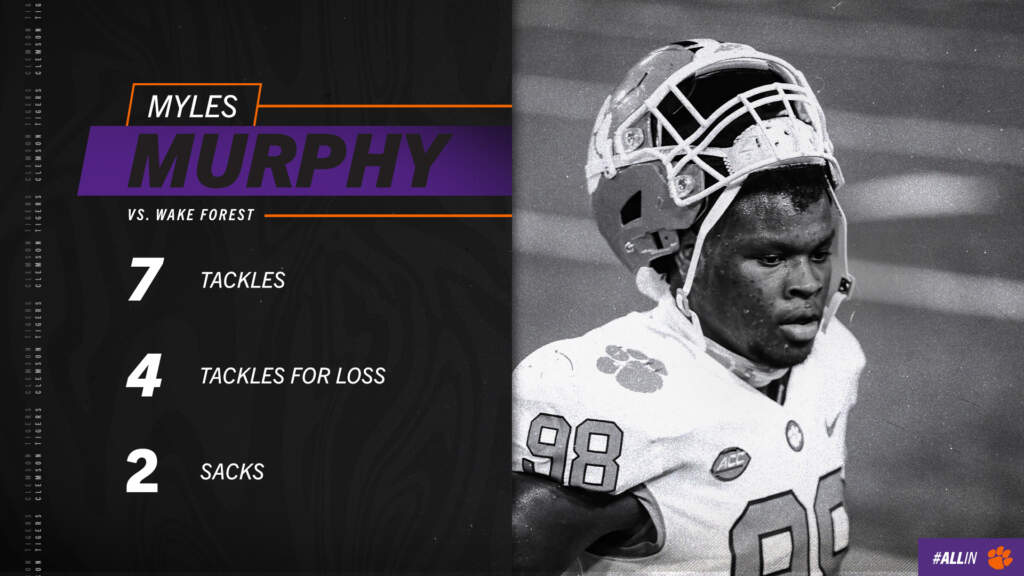