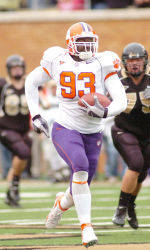 Gaines Adams to be Honored by SC Athletic Hall of Fame

COLUMBIA, SC – Clemson star defensive end Gaines Adams, the No. 4 overall selection by Tampa Bay in the recent NFL draft, has been named the 2007 Amateur Athlete of the Year by the South Carolina Athletic Hall of Fame.

Adams was only the second unanimous All-American in Clemson history and was voted a first team All-American by all five major news services. He was the ACC defensive player of the year for 2006. He had 12.5 sacks, tops in the ACC, third in the nation and tied for the second most in a single season in school history and set the Clemson record for sacks by a senior. Adams tied the Tigers’ career sack record with 28. He also had a school record streak of eight consecutive games with a sack. He had 63 tackles for the season, his career high and he is second in Clemson history among defensive linemen in pass breakups with 21. He finished his college career with two sacks against Kentucky in the Music City Bowl. He started in each of the last 25 games of his career.

Tickets, at $500 for a table of eight, can be purchased by contacting the hall of fame at 803-779-0905 or by logging on to www.southcarolinaathletichalloffame.org.

Some 30 past SCAHOF inductees will return for the blue jacket ceremony.

Following are bios of the SCAHOF Class of 2007:

Jerry Martin A Columbia native and four-sport star athlete at Olympia High School, Martin earned athlete-of-the- year honors by the Columbia Record and made all-state in football and basketball. He went on the Spartanburg Junior College and Furman University and is in both schools’ halls of fame. Martin starred in baseball and basketball at Furman. As a Paladins’ senior in 1971, he scored 36 points in a Southern Conference Tournament game and earned MVP honors. He went on to play 11 seasons as a Major League Baseball outfielder, compiling a .251 career batting average and a .982 fielding average . His best years came with the Philadelphia Phillies in 1978 (.271 BA, 9 HRs, 36 RBI), and with the Chicago Cubs in 1979 (.272, 19 HRs, 73 RBI) and 1980 (.227, 23 HRs, 73 RBI). In 2000, The State newspaper ranked Martin the eighth-best player to come out of South Carolina. Martin is in his 18th season as a coach in the Phillies minor league system.

Max Runager Runager starred at USC in the 70s and is the punter on the Gamecocks’ all-time modern-era team. The Philadelphia Eagles selected the 6-1, 189-pounder from Orangeburg in the eighth round of the 1979 draft and Runager went on to an 11-year NFL career and picked up two Super Bowl rings and an NFC title. He amassed 26,581 yards on punts for a 40.2 career average with a career-best long boot of 64 yards. His best years came in 1983 with the Eagles with a 41.7 average, and with the San Francisco 49ers in 1984 (41.8) and 1986 (41.6), the latter two seasons helping the 49ers win Super Bowls. He was selected to the Eagles all-decade team and ranks as only one of three USC players to own two Super Bowl rings.

Gary Gregor Gregor enjoyed an outstanding basketball career at USC. The burly 6-foot-7, 235-pound forward led the ACC in rebounding in 1967 and 1968 and made All-ACC both years. He averaged 15.6 points and 12.6 rebounds for his career, and earned induction into the USC Hall of Fame in 2003. Gregor played six years of professional basketball – four in the NBA and two in the ABA. The first-round draft pick of Phoenix in 1968 made the NBA’s All-Rookie team with an 11.1 scoring and 8.9 rebound average. He finished his career with a 9.8 scoring and 7.0 rebound average. Gregor recently moved from Ohio to Columbia.

Bill Spiers The Cameron native, from a multi-sport star athlete at Wade Hampton Academy where he quarterbacked his team to a two SCISA state football championships, accepted a baseball scholarship to Clemson, where his father Bud and brother Mike played. Bill wound up making first-team All American by The Sporting News as well as first-team All-ACC and All-ACC Academic. He holds the Clemson single-season record for triples with 11. After hitting .345 his first two seasons, he answered football coach Danny Ford’s ad in the student newspaper for a punter and averaged 39.2 yards, 12th-best in school history. The Milwaukee Brewers made the slick-fielding infielder their first-round draft pick and Spiers went on to a 13-year Major League Baseball career with a .271 batting average, 37 home runs and 388 RBI. In his latter years, he joined the Houston Astros, and enjoyed his best season with a .320 average, 27 doubles and 48 RBI while playing seven different positions. The Charleston Post-Courier named Spiers No. 57 on its list of South Carolina’s 100 Greatest Athletes of the Century. When he retired in 2001, Spiers declined an offer to become a coach with the Astros and lives in his hometown with wife Laura and coaches his two children in youth sports.

I.M. Ibrahim Ibrahim coached Clemson soccer to national acclaim from 1967-1994. His success popularized the sport in the state of South Carolina at all levels of competition. He led the Tigers to the national NCAA soccer championships in 1984 and 1987. His teams finished in the nation’s Top Five 13 times, and 19 of his teams ranked in the Top 25 — both records for any coach in any sport at Clemson. He produced several All- Americans and “loaned” a few players to the Tigers football program to serve as place kickers. Ibrahim, a Clemson Hall of Fame inductee, still resides in Clemson as a successful businessman.

Cot Campbell Campbell pioneered thoroughbred partnerships in the 1970s to give thousands of fans an opportunity to participate in the Sport of Kings by sharing financial costs of ownership. As president of Dogwood stables in Aiken, Campbell ranks as South Carolina’s most visible figure on the national racing stage. He is a major factor in the South Carolina equine industry (the No. 2 industry in the state) that produced a $478 million economic impact for the state (including $63 million for Aiken) in the 2005 equine census by the S.C Department of Agriculture. Campbell has produced six thoroughbreds to surpass the million-dollar mark in earnings. Dogwood’s Summer Squall won the 1990 Preakness and finished a close second in the Kentucky Derby. Storm Song won the 1996 Eclipse Award (horse racing’s equivalent of the Heisman Trophy) as the nation’s best 2-year-old filly, and Inlander took the 1987 Eclipse as the country’s best steeplechase horse. Campbell established the Dogwood Dominion Award in 1993 to honor racing’s unsung heroes. Dogwood, which perennially ranks among the nation’s top money-earning stables, set its all-time earnings record in 20005 with $2,688,782. Campbell, author of three books on horse racing, has received two prestigious awards – for “outstanding contributions to racing.” He is a member of the Georgia Sports Hall of Fame. Campbell is caricatured in a collage of famous stars (which include JFK, Joe D & and Marilyn, Wilt, MJ, Ali, Joe Louis, Jack Dempsey, Mickey Mantle, Jackie Robinson, Paul Newman, Liza Minelli, Joe Namath, Johnny U., etc) in a mural that hangs in the famed Gallagher’s Steak House in N.Y.

Jack Douglas Quarterback, one of the Citadel’s most successful teams ever and still holds many of the school’s offensive records. He finished as the all time leading rushing quarterback in NCAA division 1AA football with 3674 career yards. He led the bulldogs to a tie for the #1 ranking in the final 1AA poll in 1992, the year the bulldogs captured their second ever Southern Conference Championship. That same year he was selected SC male amateur athlete of the year and the SC offensive player of the year. During his career, Douglas led The Citadel to memorable upsets over bigger colleges such as Navy in 1989, SC in 1990, Arkansas in 1992 and Army in 1991 and 1992. He served as team captain his final two years at the Charleston school. Citadel retired his jersey in 1993 and inducted him into its HOF in 2000. Currently director of core market development at Colonial supplemental insurance.

Catherine Lempesis Lempesis has excelled as a road-running competitor and as a high school coach and has campaigned for gender equity in the teaching-coaching ranks. She began running after raising a family and in 1992 she finished eighth in the Boston Marathon (Masters Division) and earned a No. 7 world ranking by Runners World Magazine. She holds the South Carolina record of 121.14 for the half-marathon in the Masters, and continues to regularly rank in the United States top 10 while competing in national races in the women’s Grand Masters Division. She has been inducted into the Road Runners Hall of Fame (1993), the South Carolina Track & Field Coaches Hall of Fame (1993). As a coach, Lempesis stands unequalled in the annals of girls’ high school track mentors. Lempesis has coached Columbia-area teams to 15 South Carolina state championships and six runner-up spots. She began at Richland Northeast High where her cross country teams finished runner-up three straight years. She moved to Spring Valley where she coached an unprecedented nine consecutive state Class AAAA track championships from 1986-1994. During that span, she also coached the Spring Valley cross country teams to six straight titles. One of her Spring Valley stars, Monique Hennagan, went on to become an UNC All-American and medal-winning Olympian. Lempesis took over the track program when Ridge View High opened its doors and led the embryonic girls team to Class AAA state championships in 1997 and 1998.