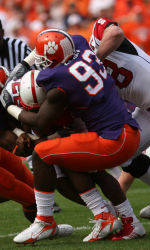 Clemson defensive end Gaines Adams was named the 2006 ACC Defensive Player-of-the-Year, the conference announced Wednesday. The senior from Greenwood, SC, who received 55 out of 80 votes for the award, has totaled 56 tackles, 15.5 tackles for loss, and 10.5 sacks this season to lead a defense that is 12th in the nation in total defense. His 26 career sacks are third-most in school history, trailing only the Perry brothers (William and Michael Dean).

Earlier in the week, Adams was named First-Team All-ACC, Clemson’s lone defensive representative on the first two teams. He is also a finalist for the Bronko Nagurski Award and Ted Hendricks Award. Adams is the third Tiger to win the ACC Defensive Player-of-the-Year Award, as linebackers Keith Adams (1999) and LeRoy Hill (2004) previously received that honor.