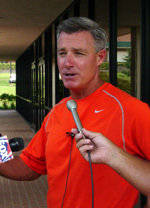 Clemson, SC – FSN-South will broadcast a half hour special previewing the 2006 Clemson football season on Friday, July 14 at 7:00 PM. The program will re-air on August 8 at 7:00 PM.

The program is entitled Around the South: Clemson. Among the features that will be aired is a segment on Clemson Head Coach Tommy Bowden, who wore a wireless microphone for the program during a 2006 Spring practice; a feature on Clemson quarterback Will Proctor; and a look at the Clemson defense that features seven returning starters, including preseason All-Americans Gaines Adams and Anthony Waters.