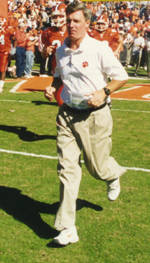 Clemson, S.C. – Clemson had an active first day of practice on the fields behind the Jervey Athletic Center. Tommy Bowden put his team through a pair of practices that lasted nearly three hours including conditioning and special teams.

“We saw enthusiasm on Friday and that was good to see,” said Bowden, in his second year as Clemson head coach. “Now let’s see if they come back tomorrow and into next week with the same enthusiasm.

“We are looking for consistency in practice that will carry over to the games. We weren’t consistent on offense or defense last year and that is something we need to improve on. It starts with consistency in these August practices.”

The Tigers spent the first 45 minutes of each practice working on stretching, conditioning and special teams play. That is certainly an area Bowden hopes will improve in 2000. Clemson worked on all phases of special teams, including the return game. The Tigers worked in shorts and shoulder pads. The team will practice in full gear for the first time next Tuesday.

Bowden announced that Pat Cyrgalis, his starting tight end from last year, would not be with the team this year. He was suspended from the team for academic reasons. He took part in the morning practice, but was not present for the afternoon workout. He had been suspended from spring practice and from the season opener against The Citadel.

“Pat Cyrgalis has been released from our football program,” said Bowden. “We have made great strides as a team academically in the last year and a half. Our players must adhere to our rules and the policies we have set. Pat was not following these rules.”

Cyrgalis caught 12 passes for 152 yards and two touchdowns last season. The native of Kearny, NJ was the only Clemson tight end in the decade of the 1990s to catch a touchdown pass. Cyrgalis would have been a red-shirt sophomore on this year’s Clemson team.

As a result, Bowden moved defensive end J.J. Howard to tight end for practice on Friday. Howard is a red-shirt freshman who was in a battle for playing time at defensive end in the spring. He is a 6-3, 220-pounder from Huger, SC who did play some tight end in high school.

Todd McClinton still has not enrolled. He is working to complete entrance requirements.

Clemson has lost one freshman signee for the season due to injury. Brian Carr, the only quarterback in Clemson’s 2000 recruiting class, will have reconstructive knee surgery on Monday to repair a torn ACL. Carr, who had over 1700 yards of total offense last year at Heritage High in Conyers, GA, was examined by Clemson doctors this week after repeated swelling in a knee after practice on Monday and Tuesday. An MRI on Wednesday revealed that he has a torn ligament in a knee. The injury was originally sustained last February when Carr was playing high school sports.

T.J. Watkins practiced with the first team at left tackle, replacing Akil Smith, who will miss the season while recovering from a blood clot in his lungs. Smith worked in non-contact situations at practice, something he will do all year. Watkins was Clemson’s starting left guard last year and now moves over to tackle. This is the third different position for Watkins as a starter in his Clemson career. Junior Will Merritt has moved into the starting left guard slot in place of Watkins.

Clemson will continue two-a-day practices on Saturday, then break for Fan Appreciation Day on Sunday.