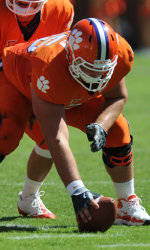 CLEMSON, SC – Clemson junior Dalton Freeman has been named to the Dave Rimington Award preseason Watch List. The award is even each year to the top center in the nation and is named after former Nebraska All-American Dave Rimington, who played against Clemson in the 1982 Orange Bowl.

Freeman is one of four ACC players on the list. He is joined by Cam Holland of North Carolina, Tyler Horn of Miami (FL) and Brain Moore of Duke. Freeman is the only ACC center on the Rimington List who is also on the Outland Trophy Watch List.

Freeman is in his third year as Clemson’s starting center and this is the second year he has been named to the Rimington Award preseason watch list. He has started each of the last 22 games and has played 26 in a row entering this year. He had 58 knockdown blocks last year, second on the team, when he started all 13 games. He allowed just two sacks all year and had an 80.6 average film grade from the Clemson coaching staff. He also made first-team Academic All-ACC last year.

In 2009, he started nine of the 14 games and was the first freshman to serve as Clemson’s starting center over the course of the season since 1943. He was a first-team Freshman All-American by Collegefootballnews.com when he helped the Tigers to the ACC Atlantic Division Championship.

No Clemson player has won the Rimington Award, but former Tiger Kyle Young was a finalist in 2000 and 2001.