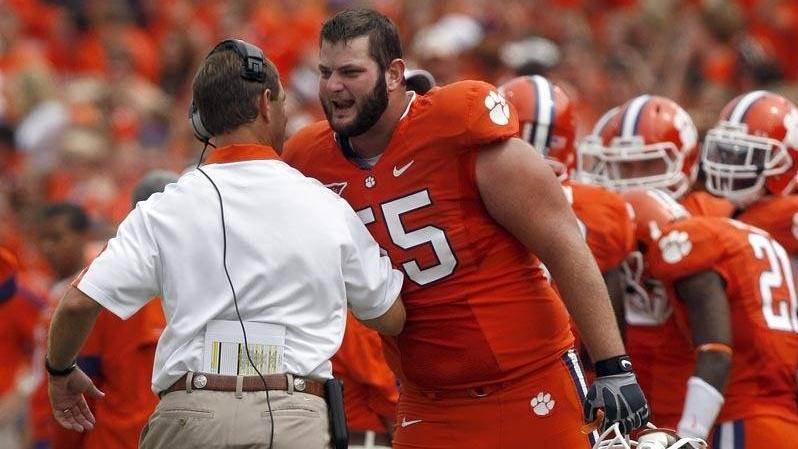 Clemson center Dalton Freeman has been named a National Football Foundation Scholar Athlete Award candidate for 2012. The graduate student is one of six players from the ACC on the list of candidates.

The other ACC players among the 50 FBS student-athletes are Sean Renfree of Duke, Dustin Hopkins of Florida State, Pete Mangum of North Carolina, McKay Frandsen of NC State, and Joey Phillips of Virginia Tech.

Nominees must be candidates who are seniors or graduate students and be in their final year of eligibility. They must have at least a 3.2 career GPA and have outstanding football ability as a first-team player or have demonstrate strong leadership and citizenship. The class is selected each year by the NFF Awards Committee, which is comprised of a nationally recognized group of media, College Football Hall of Famers and athletics administrators.

The NFF Awards Committee will select up to 16 recipients and the results will be announced via a national press release on October 25. Each recipient will receive an $18,000 postgraduate scholarship. Each member of the 2012 National Scholar Athlete Class will also travel to New York City to be honored December 4 during the 55th NFF Annual Awards Dinner at the Waldorf-Astoria.

Freeman is in his fourth year as Clemson’s starting center. He was a first-team All- ACC selection on the field last year when he started all 14 games and helped the Tigers to the ACC Championship. Last year he was a finalist for the Rimington Award, which is given to the top center in college football. He is a three-time academic All-ACC selection as well.