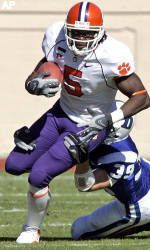 Clemson, SC — Four Clemson football players will change positions for the beginning of spring practice next week. Head Football Coach Tommy Bowden made the announcements on Wednesday. As is the case every year, other changes could be announced before, during or after spring practice. Clemson begins spring practice in the morning on Saturday, March 8. The annual Spring Game will be April 12 at 1:00 PM in Clemson Memorial Stadium.

Senior Rendrick Taylor (Clio, SC), a receiver his first three years, will begin spring practice as an inside linebacker. Taylor has had an injury plagued career, missing 10 games over the last three years, but has 46 career receptions for 480 yards in 27 games. He was fourth on the team in receptions last year with 25.

Junior Sadat Chambers (Pageland, SC) will return to safety, the position he played as a freshman, after serving as a running back in 2007. Chambers had 10 tackles on defense as a freshman when he played in 11 games. Last year he was the team’s fourth leading rusher with 161 yards in 28 carries. He had a 63-yard touchdown run against Central Michigan when he had a season high 112 yards in 10 attempts.

Senior Jock McKissic (Opelika, AL) will move to offensive tackle from defensive tackle. McKissic has played on defense each of the last three years, including 2006 when he started 12 of 13 games. He had an 82-yard interception return for a touchdown against South Carolina that year. He has played 911 snaps over the last 37 games as a tackle.

Finally, red-shirt sophomore Mike Wade (Greer, SC) will return to quarterback this spring. Wade red-shirted 2006 as a freshman quarterback, then served as a reserve safety in 2007. He also served as the holder on placekicks and will continue in that capacity.