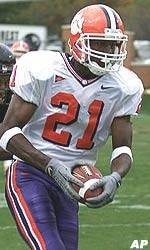 Clemson, S.C. — Four Clemson players have been named to the ACC All-Freshman team as chosen by The Sporting News. Derrick Hamilton (WR), Ben Hall (TE), Donnell Washington (DL) and Eric Sampson (LB) were all named to the team. Clemson had more selections than any other school.

Washington had 44 tackles for the season, most among Clemson freshmen. He also had eight tackles for loss and four sacks. Sampson was right behind him with 35 tackles. He had 14 in the win over Wake Forest when John Leake was injured. Freshmen made significant contributions to Clemson’s season in 2001. Four different freshmen (Derrick Hamilton, Roscoe Crosby, Airese Currie, and Ben Hall) scored touchdowns for the Tigers in the 49-24 Humanitarian Bowl victory over Louisiana Tech. It marked the first time in Clemson history that four different freshmen scored a touchdown in the same game.

Clemson freshman receivers combined to catch 106 passes for 1548 yards and 12 scores. That is the most productive freshman class in Clemson history in terms of all three categories. A freshman led Clemson in receiving in 10 of the 12 games in 2001.

Clemson freshman defensive players combined to make 173 tackles, 15 tackles for loss and five quarterback sacks in 2001. At the end of the year, 13 Clemson freshmen were listed on the 44-man two-deep, more than any other final season depth chart in Clemson history. Clemson played six freshmen at a time on defense during games in the second half of the season.

The 14 freshmen who played in games for the Tigers this year combined to appear in 3097 plays from scrimmage (not counting special teams), an average of 221 plays per freshman over the course of the season.