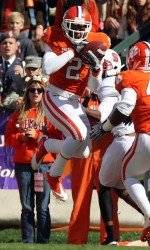 CLEMSON, SC – Four Clemson players, including three starters from the Tigers ACC leading scoring defense, have been named first-team All-ACC. The team was released by the Atlantic Coast Sports Media Association on Monday.

Clemson defensive end Da’Quan Bowers, safety DeAndre McDaniel and defensive tackle Jarvis Jenkins, were all named first-team All-ACC from the Clemson unit that ranks ninth in the nation in scoring defense. Clemson had more first-team selections to the All-ACC defensive team than any other school.

Chris Hairston was the only Clemson player on offense to make first team All-ACC. Tight end Dwayne Allen was a second team selection.

Clemson and Maryland had the most first-team selections with four apiece, while Virginia Tech, Boston College, and Miami all had three apiece.

Bowers ranks first in the nation in sacks (15.5) and is second in tackles for loss (25). He is a finalist for the Lombardi Award, the Nagurski Award and the Bednarik Award.

McDaniel was named first-team All-ACC for the second consecutive year. He had a team best four interceptions and his 15 career interceptions rank third among all active FBS players and second best in Clemson history. He has a team best 73 tackles this year.

Jenkins was a key to Clemson’s defensive front this year as a senior tackle. He has 51 tackles for the season, including nine tackles for loss and 16 quarterback pressures.

Allen finished the regular season with 31 receptions for 356 yards, second best on the team. His total is the most in school history by a sophomore tight end.

Clemson kick returner Marcus Gilchrist was an honorable mention selection as a return specialist. Gilchrist ranks in the top three in the ACC in kickoff returns and punt returns, the only ACC player in the top three of both categories.