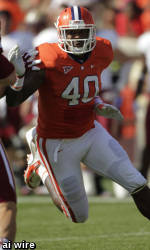 CLEMSON, SC – Tajh Boyd, Sammy Watkins, Chandler Catanzaro and Andre Branch all led the ACC in various statistical categories in 2011. According to final statistics released by the ACC, the four players combined to lead the conference in 10 categories.

Boyd is the first Clemson quarterback to lead the ACC in passing offense and total offense in the same year since 1957 when Harvey White accomplished the feat. White was also a sophomore and a first-team All-ACC quarterback that year.

Watkins ranked first in the ACC in all-purpose running yards with 2288 in 14 games, good for a 176.0 average. Watkins 2288 all-purpose yards rank second in ACC history, trailing only the 2680 former Tiger C.J. Spiller accumulated in 2009, his senior year. Watkins, a freshman from Fort Myers, FL, finished the year with 82 catches for 1219 yards and 12 touchdowns.

Mark Buchholz in 2007. Catanzaro led the ACC in total points scored with his 118 this year and he also tied for the ACC lead in field goals with 22. He was 9-12 on field goals of 40 yards or more and his 8.4 points per game ranked second in the ACC.