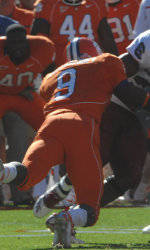 Four Tigers Have Injuries that Will Limit Summer Work

Linebacker Kavell Conner, and running backs Ray Ray McElrathbey and Ronald Watson, Jr, all have had arthroscopic knee surgery in the last week. Freshman Drew Traylor suffered a broken ankle at home in Alabama before he came to Clemson last week.

Conner and McElrathbey are expected to be ready for the beginning of preseason practice on August 4, while Watson may not be ready for that first practice. Traylor’s return to the team is unknown at this time as he is still in a cast. He is enrolled in classes at Clemson for the second session of summer school.

Connor played in all 13 games last year as a red-shirt freshman linebacker and had 31 tackles, including a team best seven stops in the win over Louisiana Tech. McElrathbey lettered as a special teams player last year and had six tackles. He was moved to running back in the spring and had 58 rushing yards in 13 carries in the Spring Game. Watson is a walk-on running back who did not play last year. He is the son of Ronald Watson, a starting defensive back for Clemson in 1983 and 1984 and a member of the 1981 National Championship team.

Traylor is a first-year freshman defensive end from Mountain Brook, AL. He had 79 tackles, including 9.5 sacks as a senior at Mountain Brook High School last year.