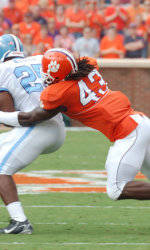 Four Clemson football players were named Players of the Week by the Atlantic Coast Conference for the week of October 23, 2006. James Davis, Nathan Bennett and Antonio Clay were named Offensive Back, Offensive Lineman and Defensive Lineman of the week, respectively, while CJ Spiller was named the ACC’s Rookie of the Week.

Complete Release from the ACC:

OFFENSIVE BACK Clemson running back James Davis rushed for a career-high 216 yards on 21 carries while scoring a pair of touchdowns in the Tigers’ 31-7 victory over Georgia Tech on Saturday. The sophomore from Atlanta, Ga., had runs of 54, 53 and 30 yards on the evening and his 216 yards rushing were the most by an ACC player this year and the most by a Clemson running back in 11 years. Davis’ rushing total was the sixth most in a single game in Clemson history.

OFFENSIVE LINE Tiger nose guard Nathan Bennett played 52 of Clemson’s 54 offensive snaps and graded a team best 90 percent in the victory over the Yellow Jackets. The Dallas, N.C., native had 10 knockdown blocks and was a major contributor in Clemson rushing for 321 yards against Georgia Tech. Bennett, a senior, had a key block on three of Clemson’s four touchdowns on the evening.

DEFENSIVE LINE Clemson inside linebacker Antonio Clay had a team-high 13 tackles in 52 plays as the Tigers downed Georgia Tech 31-7. The sophomore from Jeffersonville, Ga., had 11 first hits, the most in a single game by a Clemson player this year. He also registered a career-high three tackles for loss, including a quarterback sack. Clay played a key role in limiting the Yellow Jackets to just 205 yards of total offense and just seven points, all season low numbers for Georgia Tech.

DEFENSIVE BACK Miami defensive back Kenny Phillips, who split time between the safety and cornerback positions against Duke last week, intercepted three passes, tying a school record held by three other Hurricane players. The sophomore from Miami, Fla., became the first player in the ACC this year to register three interceptions in a single game. Phillips added four solo tackles, including one tackle for loss, as the Hurricanes defeated the Blue Devils 20-15 in Durham.

SPECIALIST Dan Ennis of Maryland kicked a career-high four field goals on Saturday as Maryland defeated NC State 26-20 in College Park. The sophomore placekicker hit from 32 and 27 yards in the first half to give the Terrapins a 6-0 halftime advantage. Ennis, a native of Sykesville, Md., would later hit a 40-yarder in the third quarter and finally an 18-yarder with just under two minutes remaining in the game to give Maryland a 26-13 lead. Ennis has hit seven of his last eight attempts over the last three games and is now 11-for-15 on the season.

ROOKIE For the third time this season, Clemson’s James Davis to rush for 321 yards on the evening.