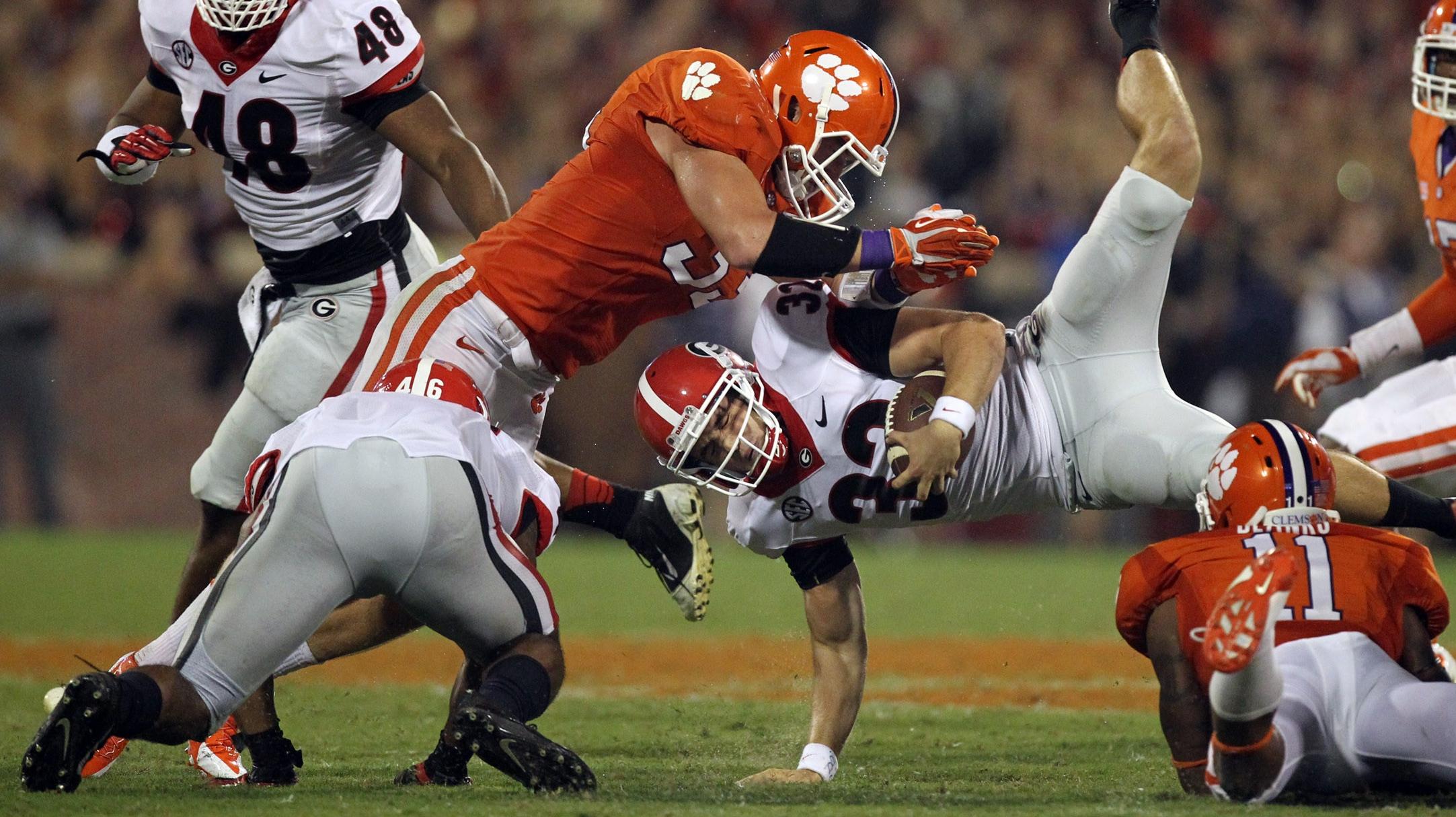 GREENSBORO, NC -Clemson senior quarterback Tajh Boyd, who accounted for five touchdowns in leading the eighth-ranked Tigers to a 38-35 win over fifth-ranked Georgia in Saturday night’s nationally-televised college football season opener, has been named the Atlantic Coast Conference Offensive Back of the Week.

Boyd headlines a list of nine honorees announced by the conference on Tuesday. Others recognized include Virginia strong safety Anthony Harris as the ACC Defensive Back of the Week. Harris was also named the Walter Camp Foundation National Defensive Player of the Week for his role in Cavaliers’ win over BYU. Florida State freshman quarterback Jameis Winston, who threw for 356 yards and four touchdowns in Monday night’s ACC win over Pitt, was named the ACC Rookie of the Week.

Boyd, who passed for three touchdowns and ran for two scores in the Georgia game, is one of four Clemson players receiving ACC weekly honors. Wideout Sammy Watkins, whose six receptions against the Bulldogs included a 77-yard touchdown, earned ACC Receiver of the Week honors. Center Ryan Norton, who led an offensive line effort that produced 467 yards and 38 points, was named Co-Offensive Lineman of the Week. Spencer Shuey, who led the Tigers with 12 tackles and a key fumble recovery, is the ACC Linebacker of the Week.

Other honorees include Syracuse’s Robert Welsh (a key quarterback sack and interception vs. Penn State) as ACC Defensive Lineman of the Week. Miami right guard Brandon Linder, who graded out at 94 percent in the Hurricanes’ 34-6 win over Florida Atlantic, shares Offensive Lineman of the Week honors with Clemson’s Norton. Duke wide receiver Jamison Crowder (113 yards and a touchdown on five punt returns vs. North Carolina Central) earned the nod as specialist of the week.

OFFENSIVE BACK – Tajh Boyd, Sr., QB, 6-1, 225 Hampton, Va.Boyd completed 18 of 30 passes for 270 yards and three touchdowns with no interceptions in Clemson’s 38-35 win over fifth-ranked Georgia.  He also had 13 rushes for 42 yards and two scores, giving him 312 yards of total offense.  He finished the game with five total touchdowns rushing and passing.  It was the seventh win for Boyd against a top 25 team as the starting quarterback, tying the school record.

CO-OFFENSIVE LINEMAN – Ryan Norton, Clemson, So., C, 6-3, 270, Simpsonville, S.C.Norton, the only first-year starter in Clemson’s veteran offensive line, played all but one snap (78 total) at center in his first career start and was Clemson’s highest graded offensive lineman at 91 percent with four knockdown blocks.  He was a big reason Clemson gained 467 yards and scored 38 points on offense and controlled the clock for 9:08 of the fourth quarter.

RECEIVER – Sammy Watkins, Clemson, Jr., WR, 6-1, 205, Fort Myers, Fla.Watkins had six receptions for 127 yards and a touchdown in Clemson’s win over fifth-ranked Georgia.  That performance included a 77-yard touchdown reception from Tajh Boyd in the first quarter that gave Clemson a 14-7 lead. It was the longest reception of Watkins’ career.  The play took place on Clemson’s first play after Georgia had scored on a 75-yard run by Todd Gurley and provided an important momentum swing.  Watkins finished the game with 154 all-purpose yards.

DEFENSIVE LINEMAN – Robert Welsh, Syracuse, Jr., DE, 6-3, 2596 Bay Shore, N.Y.  Against Penn State, Welsh recorded six tackles, including four solo and a sack for a loss of four yards, and added an interception in his first career start. Welsh returned the interception 31 yards to the Penn State 1-yard line, setting up Syracuse’s touchdown that brought the Orange to within six, 23-17, with just less than seven minutes to play.  His first tackle during the Nittany Lions’ first offensive series was on a 3rd-and-1 play on which he stopped the ball-carrier for no gain.

LINEBACKER – Spencer Shuey, Clemson, Sr., LB, 6-3, 230, Charlotte, N.C.Shuey’s 12 tackles were a team-high and five more than any other defender as he led the Clemson defense in the win over Georgia.  He also had a key fumble recovery that led to a Clemson touchdown.  Shuey’s tackles were important during a 10-possession stretch from the second quarter to the fourth period, when the Bulldogs scored just one touchdown and had six possessions of four plays or less.

DEFENSIVE BACK – Anthony Harris, Virginia, Jr., SS, 6-1, 185, Chesterfield, Va.Harris was named the Walter Camp Football Foundation Defensive Player of the Week after recording 11 tackles, including three solo stops, one quarterback sack (first in his career), a blocked punt and an intercepted a pass in Virginia’s season-opening 19-16 victory over visiting BYU. Harris’ blocked punt in the third quarter set up Virginia’s first touchdown. Then, with the Cavaliers trailing 16-12 and three minutes left to play, Harris picked off a third-down BYU pass, returned it 10 yards and then pitched the ball to linebacker Henry Coley, who ran another 23 yards. Virginia scored the winning touchdown on the next play.

ROOKIE – Jameis Winston, Florida State, Fr., QB, 6-4, 225, Hueytown, Ala.Winston delivered a school-record setting performance as the 11th-ranked Seminoles opened their season with a 41-13 ACC road win at Pitt on Monday night. Winston completed 25 of 27 passes for a 92.6 completion percentage, topping the previous Florida State single-game record of 87.5 posted by Danny Kannell against NC State in 1995. Winston finished the game with 356 passing yards while throwing for four touchdowns and running for one more.