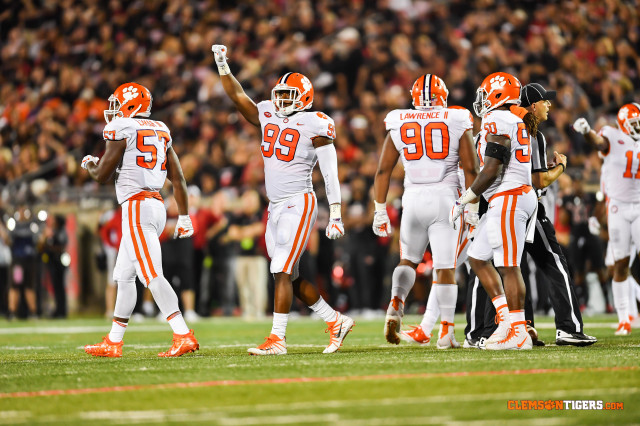 Clemson, SC—Clemson defensive players Clelin Ferrell, Austin Bryant, Kendall Joseph and Mark Fields will all return for the 2018 football season. Head Coach Dabo Swinney made the announcement at the team’s banquet on Saturday night at the Poe Indoor Football Facility.

The only decision Swinney is waiting on is from two-time All-American defensive tackle Christian Wilkins. Wilkins was at the banquet, but told the crowd while he was making his captain’s statement that he had not made up his mind about next season. He has until Monday to make a decision.

Should Wilkins return, the 2018 Clemson front four on defense would have three returning players who were first-team All-American by one of the major services in 2017, plus Dexter Lawrence, a first-team All-ACC tackle who is regarded as one of the top defensive linemen in the nation.

Earlier this week All-American offensive tackle Mitch Hyatt announced that he would return for his senior year.

Clemson has lost four players who were eligible to return for the 2018 season. Wide receivers Deon Cain and Ray-Ray McCloud, strong safety Van Smith and offensive guard Taylor Hearn all will turn professional. Hearn has graduated, but had another year of eligibility after red-shirting 2014.

Ferrell, a red-shirt sophomore in 2017, was first-team All-American by Associated Press and a second team selection by USA Today, Sporting News, the Football Writers Association and Sports Illustrated. He led the Tigers in sacks with 9.5 and tackles for loss with 18 among his 65 total tackles.

Bryant, a red-shirt junior in 2017, was named a first-team All-American by the Football Writers Association of America, a second-team selection by the Walter Camp Foundation and a third team selection by the Associated Press. Bryant had a Clemson record tying four sacks in the win over Auburn and finished the season with 8.5 sacks, second on the team to Ferrell. He had 57 tackles for the season.

Joseph, a junior in 2017, finished second on the 2017 team in tackles with 90, including 10 stops against Alabama in the Sugar Bowl on January 1. He added five tackles for loss in his 12 games, 11 as a starter. The two-year starter, who was a third-team All-ACC selection, led Clemson’s second ranked defense in tackles in four games, including the ACC Championship game against Miami and the Sugar Bowl against Alabama.

Fields was injured much of the year, but is expected to compete for a starting cornerback position with the graduation of starter Ryan Carter.

Wilkins, who earned his Clemson undergraduate degree in just three years, has been a two-time first-team All-American. He will be presented the Willis Award as the top Defensive Lineman in the nation by the Columbus (Ohio) Touchdown Club in February. He was named a first-team All-American this year by Sporting News and the American Football Coaches Association and a second team selection by Associated Press and he Walter Camp Foundation. He finished the year with 55 tackles , 8.5 tackles for loss and 4.5 sacks.