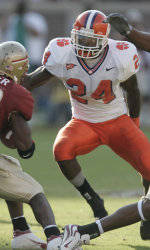 Four senior members of the 2005 Clemson football team had signed free agent contracts as of Tuesday morning. The list includes tight end Cole Downer with the Detroit Lions, fullback Steven Jackson with the Minnesota Vikings, offensive guard Chip Myrick with the Indianapolis Colts and Jamaal Fudge with the Jacksonville Jaguars.

Downer caught six passes for 47 yards in eight games in 2005. He missed four games when he suffered a ruptured spleen against Miami. Ironically, that was the game in which he caught his only career touchdown pass. Jackson was an outstanding blocking fullback for the Tigers who caught five passes in 2005. Myrick played in 39 games over the last four years for the Tigers as a versatile offensive lineman. He started five of the 12 games in 2005.

Fudge was Clemson’s fourth leading tackler in 2005 with 74 stops. He led or tied for the team lead in interceptions each of the last three years and finished his career with 10 interceptions and 283 career tackles, including 116 as a sophomore in 2003. He started each of the last 36 games of his Clemson career and played in 49 consecutive games over four years.

Former Clemson players have had success as free agents in the NFL over the years. Overall, 38 Clemson free agents have gone on to make NFL clubs and participate in NFL games. That list includes former Washington Redskins Center Jeff Bostic, who went on to play 14 years in the NFL and win three Super Bowl Championship rings, more than any other former Clemson player. Bostic, Kevin Mack and David Treadwell are former Clemson free agents who went on to play in the NFL Pro Bowl. Steve Kenney, who will be inducted into the Clemson Hall of Fame this fall, was also a free agent coming out of Clemson before going on to a nine-year NFL career.

Other free agent signings are expected in the next few days.

Over the past weekend, three members of the 2005 Clemson team were drafted by the NFL. The list includes Tye Hill, a first round pick of the St. Louis Rams, Charlie Whitehurst, a third round pick of the San Diego Chargers, and Charles Bennett, a seventh round selection of the Tampa Bay Bucs.