Time and again when we hear national media members talk about the success of the Clemson program during the Dabo Swinney era, they talk about the “Clemson culture.” There are many elements that make up a program’s culture, but one is certainly the family atmosphere.

One of the tangible examples of the family atmosphere is the number of former Tiger football student-athletes who work in the program’s organization. No less than 22 former Tiger gridders were on the Swinney organizational chart at the start of the 2021 season.

“They all helped build the culture,” said Swinney. “They are big reasons for the success we have had the last 12 years. They have seen all sides of the program, from their freshmen year through graduation.

“They all love Clemson and love this program. It is awesome to see. I tell them this program is built for the 30-year-old version of themselves.

“I have enjoyed seeing so many of our former players go into coaching,” continued the Tiger head coach. “I am so pleased that we have been able to give many of our former players their start in coaching or athletic administration. Many times, you just have to get your start, and we have been able to do that with a lot of them.”

A look to the staff at South Florida shows that former All-American Da’Quan Bowers, a student assistant on Swinney’s staff in 2018 and 2019, is now the full-time defensive ends coach under Jeff Scott. Former Tiger staffer Cameron Aiken and player Xavier Dye are also full-time assistant coaches with the Bulls.

“I love seeing these former players who were on our staff progress in the profession at other schools in full-time capacities.”

The coaching tree has continued to grow in recent years, as the reputation of the Clemson program and the level of responsibility Swinney gives his staff prepares his young coaches for their future outside of the Tiger program.

“We expose them all to certain versions of the program that they think they know about, but they really don’t until they join the staff. I like to have them involved in different aspects of the program. Sure, there are the Xs and the Os and recruiting, but there are so many other responsibilities they need to see that are part of the profession.”

These former players are not just coaches on the field, they also hold key administrative positions. Jeff Davis is in his 18th year as assistant athletic director for football player relations. He is one of the reasons the P.A.W. Journey program has been so successful. The former captain of the 1981 Clemson national championship team is a father figure to many of the current Tigers.

Antoine McClain returned to Clemson this year after four years on NFL rosters. He is the director of former player engagement & development, a position that keeps the former players connected in various ways to Swinney’s program. Henry Guess, a wide receiver for the Tigers from 1992-95, has been on the Clemson video staff for many years.

“All these former players are living examples to all of our current players. They serve as great mentors. They care about the current players, because they were in their shoes five, 10 and 15 years ago.”

Sixteen of the 22 former Tigers in the organization this year played for Swinney. Ten were on NFL rosters at one point and six got into at least one NFL game. Six were drafted, five by the NFL and one (Bill Spiers) by Major League Baseball.

It is interesting to note that seven (Thomas Austin, Miguel Chavis, Kavell Conner, Tyler Grisham, McClain, DeAndre McDaniel, C.J. Spiller) were all on the Tiger team when Swinney took over as head coach on Oct. 13, 2008. They were all part of a core group of Tigers that was “All In” with the Swinney culture from the first day.

Nine of the 22 are in their first year on Swinney’s staff. That list includes former All-America quarterback Tajh Boyd, a player development staffer for the offense, and Cole Stoudt, a quarterback who led the Tigers to a 40-6 bowl win over Oklahoma in his final game in 2014. Tyrone Crowder, a starter on Clemson’s 2017 team, and Artavis Scott, Clemson’s career leader in receptions, join Elijah Turner as the youngest former Tigers on Swinney’s staff.

The 13 veteran former Tigers on staff have combined for 89 years of experience at Clemson.

Four of the 22 are full-time coaches who are allowed to recruit off campus. That list includes Offensive Coordinator Tony Elliott, who played for Swinney when he was Clemson’s wide receivers coach in 2003, and Brandon Streeter, passing game coordinator and quarterbacks coach, who did not play for Swinney, but was a quarterback on the Tiger team from 1996-99. Grisham played for Swinney when he was the wide receivers coach and head coach between the 2005-08 seasons.

The fourth former Tiger on the full-time coaches list is Spiller, the All-America running back from 2006-09 who went on to play eight years in the NFL.

“I remember sitting in my office prior to the 2009 season when we met to figure out how we were going to design and distribute the ‘C.J. Spiller for Heisman’ poster,” added Swinney. “Little did I know he would be on our coaching staff a dozen years later. I don’t think he thought of going into coaching when he was a player.

“Now, to be with him every day and watch him mentor, teach and coach these running backs…it is so special. It is so neat to see him go full circle from a freshman in 2006 to a senior leader and Heisman Trophy candidate in 2009, to being a first-round draft pick, to playing in the NFL for a long career, to being named to the College Football Hall of Fame this year and returning to Clemson as a coach.

Swinney can say that last statement about many of the former Tigers on his staff. It is a reason the Clemson culture continues from year to year. 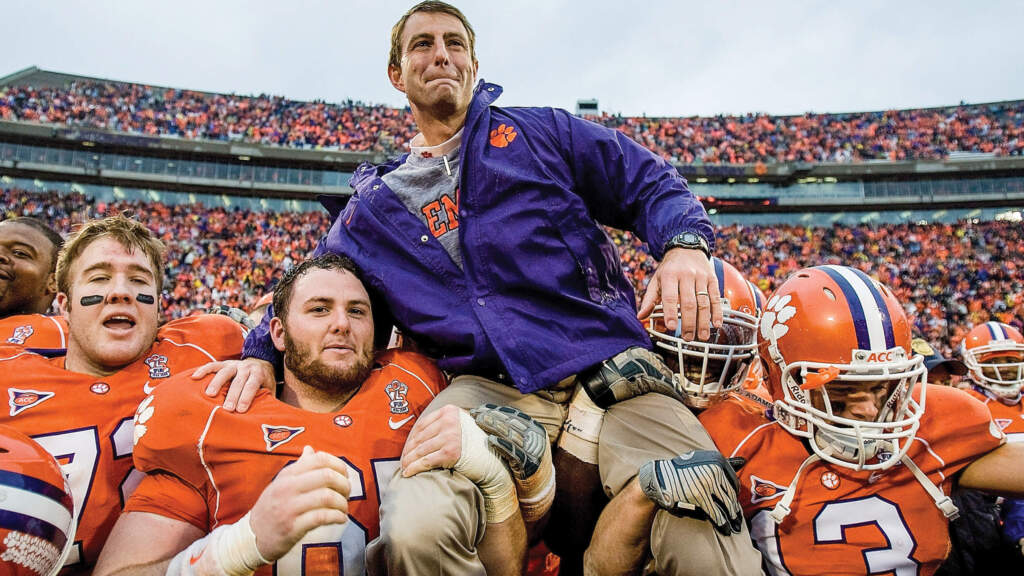