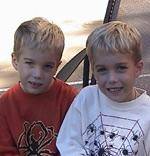 How many times have you attended a sports banquet that features speeches by the departing seniors. At some point in the evening, an emotional athlete will state that these were the best four years of my life because, “I have made friendships that will last a lifetime.”

Former Clemson football players Stacy Long and Chuck O’Brien are living proof that those quality relationships formed over the four-year period as members of the Tiger football program have a strong bond that overcome the challenges created by time and distance.

Long was a first-team All-America offensive tackle in 1989 and 1990. He was one of three finalists for the 1990 Outland Trophy, just the second Tiger in history to be named a finalist for nation’s top lineman award. He was the leading vote-getter among offensive linemen for the All-ACC team in 1989 and 1990, and was a major reason Clemson ranked among the top 10 rushing teams in the nation both seasons, years the Tigers were 10-2 each season.

While Terry Allen got all the offensive glory for his 73-yard run at Florida State in 1989, a 34-23 Clemson victory, Long had a breakout game with an 85-percent grade and 10 knockdown blocks against Florida State All-American Odell Haggins.

Long and O’Brien were Tiger teammates for four years (1987-90). They were both major reasons Clemson had a 40-8 record during that four-year stretch, the best four-year period in Clemson history.

Those Clemson teams had talented players, but they were also players of strong character, a necessary intangible for success in any team sport. The friendships formed on the Jervey Athletic Center practice fields and in Death Valley were strong, and are evident today.

Long played professionally in the Chicago Bears organization for two years, but had to cut his career short as the result of a knee injury. While his playing career in Chicago was short, he did meet his wife, also named Stacy, during his stay in Chicago. They go by Mr. Stacy and Ms. Stacy to avoid the inevitable confusion. The ultimate confusion occurred, however, when their first child was born.

“When Tanner, our first son, was born in 1994, the hospital documents stated that I had given birth,” said the former Clemson All-American with a laugh. “It took us a while to straighten everything out with the insurance companies.”

Long and his wife came back to Clemson for a year so Stacy could finish up his degree, which he accomplished in 1995. With degree in hand, he returned to Chicago where he is a district manager for Home Depot. O’Brien signed a free agent contract with the San Diego Chargers, but was injured and did not play. He is now an area manager in Texas for Loomis Fargo.

The former teammates kept the friendship going after their Clemson careers, but it has reached a new level in recent years.

In 1997, Long and his wife had twin boys, Colton and Austin, a joyous occasion they shared with O’Brien and his wife (Sonya). The O’Briens were very interested in the progress for an obvious reason. They also had twin boys just two months earlier. When Connor and Corey O’Brien were born, they called the Longs to share their excitement. Soon, the respective fathers were arguing over which son would be starting for Clemson when the 2015 season opened.

One day, a phone call came to Long from O’Brien that was not a joyous occasion. After many tests, O’Brien’s twin sons (pictured right) were diagnosed with Cystic Fibrosis, a genetic disease affecting 30,000 children and young adults in the United States. It is a fatal disease for which there is no cure for right now. The disease primarily attacks the lungs and digestive system, causing acute difficulties in breathing and digesting.

O’Brien’s sons, now six, have to take breathing treatments three times a day and must take medication 20 minutes prior to each meal to help in the digestive process. Periodically, they must be hooked to a machine that shakes them to break up mucus in their lungs. Both boys are very susceptible to respiratory infections.

Soon after the discovery of the illness, O’Brien and his family became involved in fundraising to find a cure for Cystic Fibrosis. “Chuck sent us a form for a Cystic Fibrosis walk-a-thon they were sponsoring and asked us if we wanted to donate to help find a cure,” recalled Long. “Our goal was to send them $50 and then find 10 friends who would give us $5 apiece for an additional $50.

“But, when we told our friends and family about the disease, the response was so great from our area that we sent them a check for $800.”

The success of that first venture gave the Longs an idea. Why not have a benefit in Chicago for the cause.

“That next Christmas, we decided to have a benefit at our home, something we call ‘Holiday Hoopla’. We charged $50 a couple and invited people to our home in Chicago. We had the local high school choir come over and they sang Christmas Carols.

“Local restaurants donated food and businesses donated raffle items. Coach Tommy Bowden sent an autographed football and we were able to get other sports-related items for a silent auction.”

That first year, the Longs raised $1,500. The second year, the gathering raised $3,500. Last year, the O’Brien family flew to Chicago for the affair, and former Tiger Vance Hammond (Long’s college roommate) and his wife (Dena) also came in for the event. With the help of auction items from Peyton Manning, Boomer Esiason, and Brian Urlacher, the 2002 event raised $7,500.

“We are hoping to hit the $10,000 mark this year,” said Long. “It is getting bigger and bigger. Last year, we had 125 guests at our home and that doesn’t include the choir and the pianist (who donate their time). We are hoping that it will continue to grow to the point that we’ll have to move it to a banquet hall.”

O’Brien is involved to the same extent in Texas with the walk-a-thon and other events that involve his surrounding community.

For Long and his wife, “Holiday Hoopla,” scheduled for December 6 this year, is certainly a highlight of their year. “The most rewarding aspect to us is knowing that someday soon there will be a cure to knock out this disease for good,” said Long. “With just a few people getting together each year, you can see what can be accomplished.

“The response from our friends and family has been so tremendous that we just keep feeding off of their generosity. Our goal is simple. We want the people who have this disease to continue to dream that one day they can wake up one morning and not have to go through their strenuous, difficult routine.”

If you would like to make a donation to help Chuck O’Brien and Stacy Long in their fight against Cystic Fibrosis, send a check made out to Cystic Fibrosis and mail to Stacy Long, 581 Cliffwood Lane, Gurnee, IL 60031.