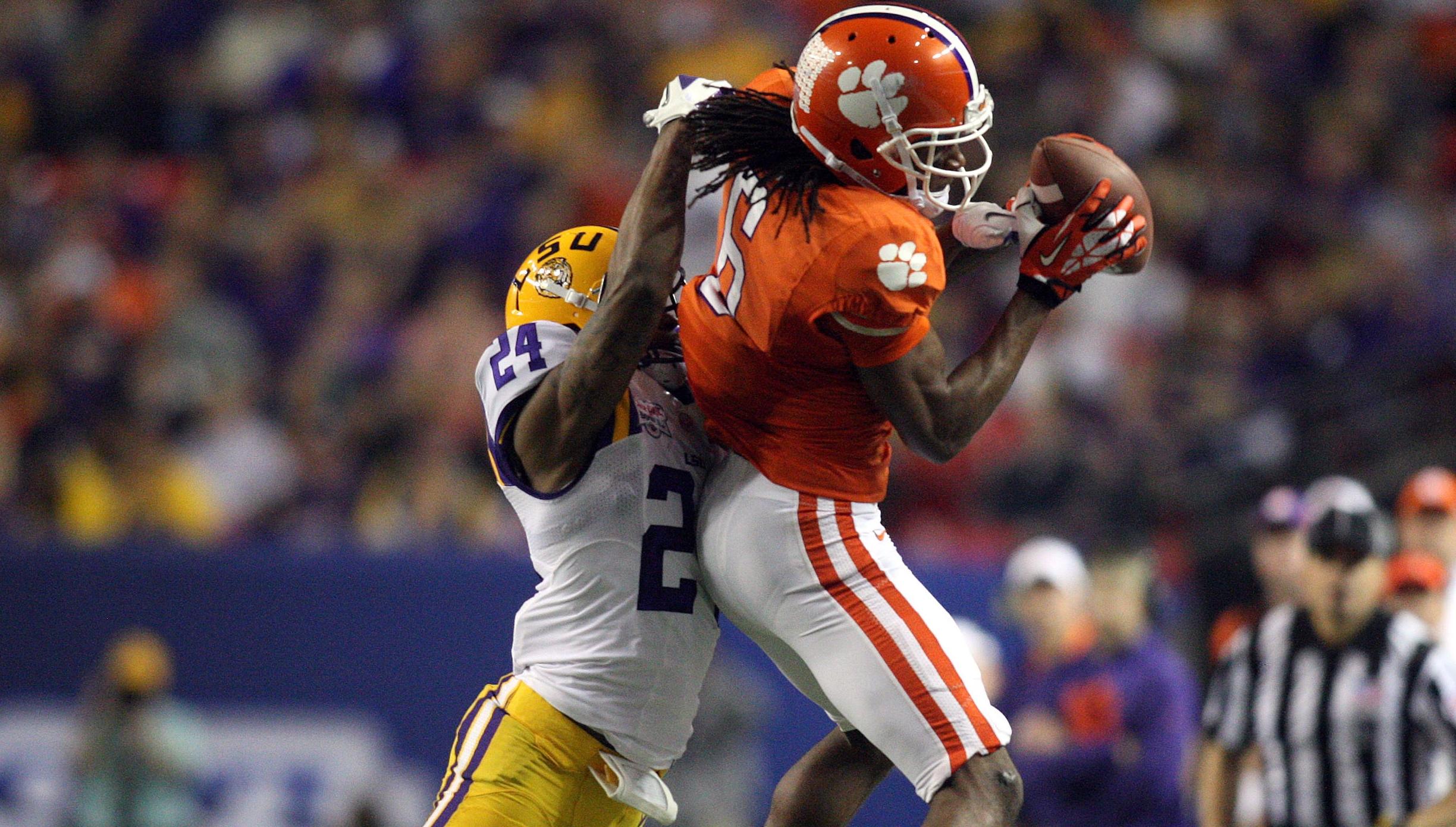 CLEMSON, SC – Five members of the 2012 Clemson football team that helped the Tigers to a ninth-place final ranking in the USA Today Poll and the school’s most victories in 32 years, hope their names will be called during the NFL draft this weekend.  The NFL Draft will take place over three days, Thursday to Saturday, April 25-27 in New York City.

DeAndre Hopkins, Andre Ellington, Malliciah Goodman, Dalton Freeman and Rashard Hall have all been listed in mock drafts by various services and publications.  Hopkins is the highest rated among the former Tigers.  Eleven mock drafts have him listed as a first-round prospect with four having him selected with the 22nd pick by the St. Louis Rams.  Charley Casserly of the NFL Network has his going 21st in the first round to the Cincinnati Bengals.

Ellington could go in the second or third round, while Goodman, Freeman and Hall figure to be selected on Saturday when rounds 4-7 are announced. The Sporting News has Ellington going to Tampa Bay in the third round with the 73rd overall selection in the draft.

Clemson has had 215 players drafted by the NFL over the years, fourth among current ACC schools according to research by the Atlantic Coast Conference.  But, the Tigers are tied for first in the ACC in draft selections over the last four years, or since Dabo Swinney has been named head coach.

Seven of the 19 selections have been top 100 choices, including three in each of the last two years.  It is he first time Clemson has had at least three top 100 selections two years in a row since the draft began in 1938.

Hopkins was a second-team All-American last year when he had 82 receptions for 1405 yards and 18 touchdowns.  The 1405 yards were a Clemson record and the 18 touchdown catches an ACC record.  He finished his career as Clemson’s career leader in reception yardage.  In his final game he had 13 receptions for 191 yards and two scores in the 25-24 win over LSU, including a 4th and 16 reception on the game-winning drive.  The 191 yards were the most receiving yards by any player in a bowl game last year.

Ellington had 212 carries for 1081 rushing yards and eight touchdowns a year ago when he was a first-team All-ACC selection. It was his second consecutive 1000-yard season.  He finished his career with 3,436 career rushing yards, fourth best in Clemson history and just 111 behind Spiller, who was named to the NFL Pro Bowl last year.

Goodman finished his career with one of his best games when he had three sacks in the victory over LSU in the Chick-fil-A Bowl.  He had 28 tackles, including seven sacks and 9.5 tackles for loss in 2012.  He also ranked in the top 10 in the nation in forced fumbles with four.

Freeman played more snaps than any other player in Clemson history over his four years as a starter.  He started each of the last 49 games of his career, the most consecutive starts by any player in Clemson history.  He was a first-team All-American according to the Football Coaches Association in 2013.  He was also a second-team Academic All-American.

Hall finished his career with 14 interceptions, tied for fourth in school history and was sixth in interception return yards with 186.  He was third on the Clemson defense in tackles last year with 85, and led the team in interceptions with four.  The second-team All-ACC safety also won a postgraduate scholarship from the Atlantic Coast Conference.