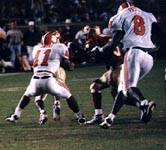 Clemson, SC – Thirty former Clemson football players are currently listed on NFL rosters. All NFL camps are now in session as the league prepares for the season openers on September 8. The list of 30 former Clemson players includes 11 who will be trying to make an active NFL roster for the first time. That list includes seven players from last year’s 9-3 Clemson team that finished 14th in the final USA Today Coaches poll.

The list of former Tigers on current NFL rosters includes four players who will be in at least their 10th year in the NFL. Chris Gardocki, who will be inducted into the Clemson Hall of Fame this year, is the dean of former Tigers in the NFL. The Pro Bowl punter now with the Cleveland Browns is in his 11th season. He led the NFL in net punting last year and was named the most valuable player of the Browns team for 2000.

Chester McGlockton (Denver Broncos) , Ed McDaniel (Minnesota Vikings) and Levon Kirkland (Seattle Seahawks) are all in their 10th seasons in the league. The last three playes are three of six members of the 1991 Clemson ACC Championship team that is still active in the NFL. The others are James Trapp (Baltimore Ravens), Brentson Buckner (Carolina Panthers) and Curtis Whitley (Oakland Raiders).

The Cleveland Browns and the San Diego Chargers have the most former Tigers in their camps with three apiece. The Seattle Seahawks could start two former Tigers at linebacker in Anthony Simmons and Kirkland, while McGlockton and Trevor Pryce could be side by side on the defensive line in Denver.