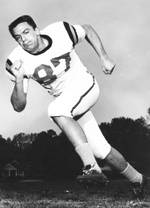 MACON, GA – Former Clemson football player Raymond Peter Masneri, 68, died Monday. Mr. Masneri was born in California, PA, the son of the late John and Theresa Serafino Masneri. He graduated from Clemson University where he was an All-ACC tight end in 1957 and 1958 and was a nominated All American. He played in the 1958 Orange Bowl and the 1959 Sugar Bowl.

Former Clemson ends coach Bob Jones called Masneri one of the finest end prospects to ever come to Clemson and the lineman had one of his best games against South Carolina in 1957. “Masneri was an All-American today,” said Clemson head coach Frank Howard after the 13-0 Tiger victory. A Clemson press release after the game stated, “Sports writers in the press box were in agreement that Masneri was the best lineman on the field against South Carolina.”

He was inducted into his high school football Hall of Fame in California, PA.

Memorial Services will be held at 11A.M. Friday at Riverside United Methodist Church in Macon, GA. The Rev. Sonny Mason will officiate. Burial will be private. The family will receive friends Thursday at Snow’s Memorial Chapel, Cherry Street from 6:30 until 8:30 P.M.

The family suggests that those who wish may make contributions to the IPTAY Scholarship Fund at Clemson University, in memory of Ray Masneri, P.O. Box 1129 Clemson, SC 29633.