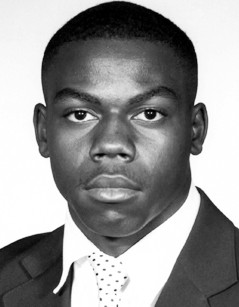 Clemson, S.C—Former Clemson football and track athlete Doug Thomas died of a heart attack on Friday at a hospital in Charlotte, N.C.  A high school football coach in the Charlotte area, Thomas was 45-years-old.

Thomas played for the Tigers between 1987-90 and was a member of the winningest senior class in Clemson history until this year’s senior group broke the record when it beat South Carolina this year for its 41st win in four years.

A native of Hamlet, N.C., Thomas played on two Clemson ACC Championship football teams (1987-88) and six  ACC Championship men’s track teams, three indoor and three outdoor.  He won three ACC individual championships in track.  He was the 1990 ACC Indoor Champion in the 55 meters and was a member of Clemson’s ACC Championship 4X100 meter relay teams in 1990 and 1991.

On the gridiron, Thomas played four years as a wide receiver and a kick returner.   As a senior in 1990 he was second on the team in receiving with 21 receptions for 309 yards and a touchdown.  He also had 11 kickoff returns for 333 yards.

Thomas had his best game against Maryland in Baltimore’s Memorial Stadium in 1990.  He had a 98-yard kickoff return for a touchdown and caught a 37-yard pass that set up Clemson’s winning touchdown in the 18-17 victory.

After his senior year, Thomas was a second-round draft choice, the No. 51 selection of the 1991 draft by the Seattle Seahawks.  Thomas was the highest draft Clemson receiver between 1983 and 2000.  He played 39 games over three seasons with the Seahawks.

Thomas was recruited to Clemson in 1986 by Woody McCorvey, longtime Clemson assistant coach in the 1980s, who is now on Dabo Swinney’s Clemson staff as Associate Athletic Director for Football Administration.

“Leon Hope, a former Clemson football player, told me about Doug Thomas when he was playing for Richmond County High in Rockingham,” said McCorvey.  “Doug was more of a track guy at first, but he had a good senior year in football.  He was going to come to Clemson on a track scholarship, then we had an opening for a football scholarship.

“We were looking for more speed at wide receiver and he fit the description.  He was always a hard worker and everyone liked him.   He was a very good receiver, as shown by the fact that he was a second-round draft choice in the NFL.  Had he played in the offense we run today, he would have caught 50 passes a year.

“He started coaching at our summer camp when Coach (Dabo)  Swinney became head coach.  He and James Lott did a good job of recruiting former players from that era to come back and work camp.  They turned it in to a reunion type of week for those guys.

“I have heard from a lot of players who were at Clemson at that time.  He will be missed.”