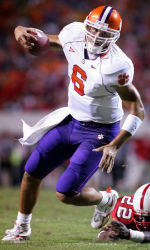 Clemson, SC – Twenty-five former Clemson football players are listed on NFL rosters heading into the preseason camps. Most of the camps start this weekend, leading towards the opening of the NFL season the weekend of September 9.

Leading the way in terms of experience is Chris Gardocki, the punter with the Pittsburgh Steelers, who is in his 16th year in the NFL. He won his first Super Bowl Championship ring last year with the Steelers. Brian Dawkins has completed 10 seasons in the NFL with the Philadelphia Eagles, including five years in which he has been chosen to the Pro Bowl.

Trevor Pryce is a third former Tiger with double digits years of experience. Now in his 10th year, Pryce is now with the Baltimore Ravens after nine seasons with the Denver Broncos. Pryce, an All-ACC defensive tackle at Clemson in 1996, has been named to the Pro Bowl four times and has two Super Bowl Championship rings.

Anthony Simmons is another veteran of the NFL who had an All-America career at Clemson. Simmons missed last season due to injury and is now with the New Orleans Saints.

The 25 former Tigers are on 21 different NFL teams. Three are with the Oakland Raiders, while two each are with Seattle and two with the Atlanta Falcons. There are 14 former Clemson players on rosters who are defensive players, nine on offense and one on special teams. Six of the players (Keith Adams, Brian Dawkins, Chris Gardocki, LeRoy Hill, Justin Miller and Trevor Pryce) were considered starters during the 2005 season.

The list includes five players who were members of Clemson’s 2005 team. Tye Hill is a cornerback with St. Louis after he was chosen in the first round, the 15th pick of the draft. Charlie Whitehurst is in camp with the San Diego Chargers after he was drafted in the third round, and Charles Bennett is with Tampa Bay after he was chosen in the seventh round. Steven Jackson (Minnesota) and Jamaal Fudge (Jacksonville) are two members of the 2005 Clemson team who are still on NFL rosters after signing free agent contracts.

The list of former Tigers going to camps could increase in the next few weeks. Four former Tigers who played in the NFL in 2005 are free agents, but have not yet signed with a team. The list included 12-year NFL veteran Brentson Buckner, who was with the Carolina Panthers last year, cornerback Dexter McCleon, tight end Lamont Hall and cornerback Antuan Edwards.

Former Clemson Players who played in the NFL last Year who are unsigned free agents at the current time: