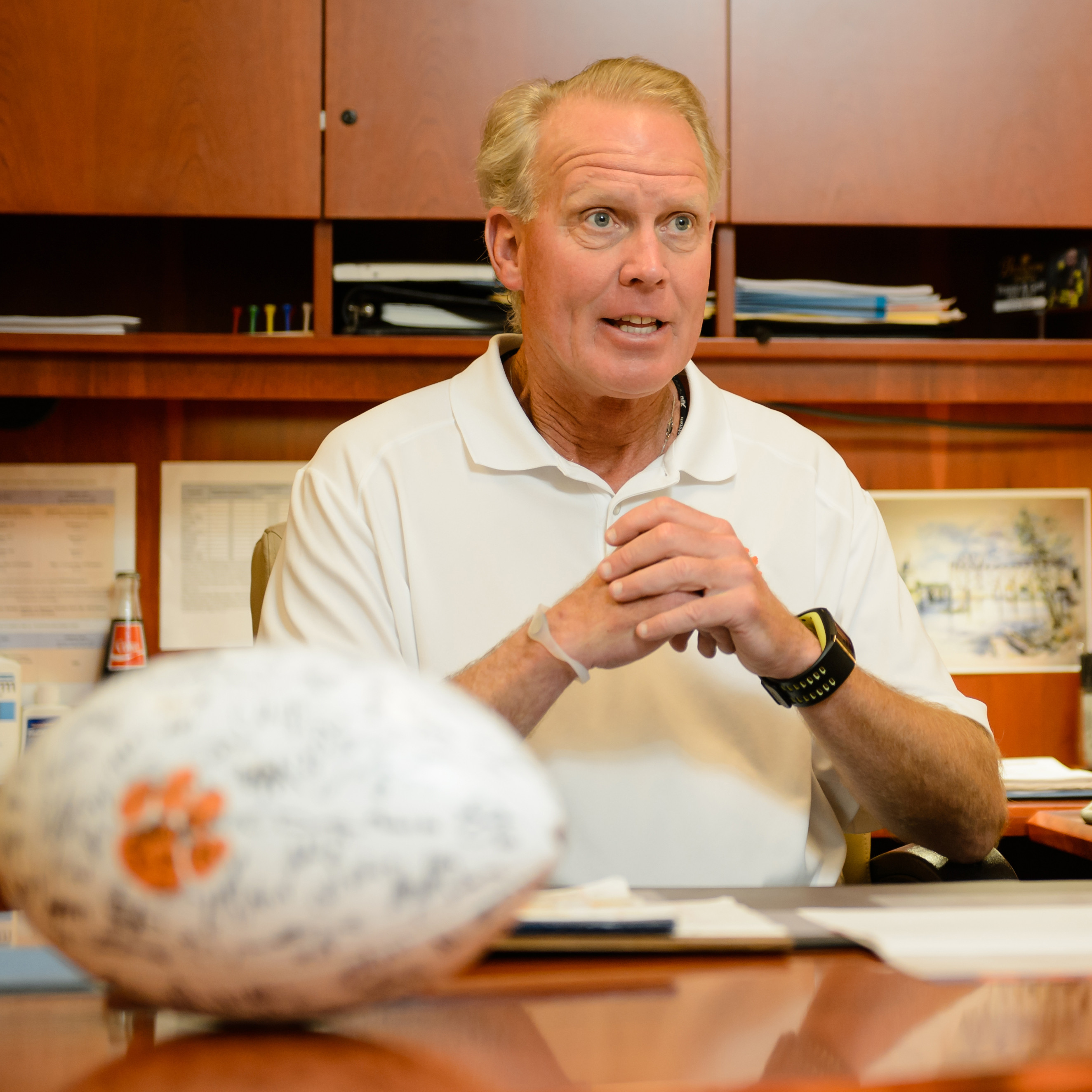 Note: The following article appears in the May issue of Orange The Experience, set to arrive in the mail for IPTAY members this week.

It takes a lot of manpower and heart to work in college athletics. For Andy Johnston, he’s seen and done it all.

As the associate director of football operations, Johnston has overseen the day-to-day workings of the football program since 1997, serving the final two years of the Tommy West era and two more coaching tenures under Tommy Bowden and Dabo Swinney. After over 30 years as a fixture in Clemson Athletics, Johnston is retiring from his position in the football office.

Johnston’s story is one that runs solid orange.

Before he became the lynchpin of football operations, Johnston’s connection to Clemson started long before his office in the WestZone ever came into existence. Johnston’s journey started out in Charleston, where his father was base commander in the Air Force before being stationed at Scott Air Force Base in Illinois. After graduating high school, Johnston took a bus down south to attend Clemson, where he majored in administrative management.

“I came in with a duffle bag and got off the bus at Highway 93 at that little convenience store across the bridge that says Clemson, and walked in,” Johnston said with his trademark smile.

Johnston’s journey continued on the hard court, where he walked on as a tennis player under former Head Coach Chuck Kriese, who drove Johnston in a way that would shape his career.

“There’s three people here that were really the driving force of my career: Chuck Kriese, Bobby Robinson and Dwight Rainey,” Johnston said. “Without Chuck Kriese, I’m not where I am. There’s no way. I remember when I came in as a freshman, he was 25, and I was 18. He was like Knute Rockne and Bear Bryant all rolled into one.

“The things that I did when I coached and how I did was the result of what he taught me. A lot of the things I do now when I teach my private lessons are a result of what I learned from him. He was definitely the biggest force.”

After graduating from Clemson with a degree in administrative management, the itch for coaching followed Johnston, and at the behest of Kriese, he served as the assistant men’s tennis coach in 1980. The itch continued to follow him, as Paul Scarpa — one of the winningest coaches in Division I tennis — extended an offer to Johnston to coach women’s tennis at Furman. It only took a year of coaching women’s tennis at Furman before Johnston’s alma mater would come calling for him again, with an opening for the head women’s tennis position.

Johnston started making his mark at Clemson. In 15 seasons as women’s head coach, he guided his squads to five consecutive ACC titles (1983-87), scored 12 top-25 finishes and made six NCAA Tournament appearances while posting a 254-160 record. He is still one of the winningest coaches in any sport as Clemson. It was during his coaching tenure Johnston began to realize just how many different hats he wore.

“As the tennis coach, I did everything,” he said. “I was a trainer, manager, bus driver and coach. You did it all. As a tennis coach, I did everything that went on with Clemson. I remember once I had to drive to Kentucky, coach the match, and drive back. I learned how to tape ankles from Danny Poole. I was the equipment manager; I’d go get the snacks at the grocery store before the match, coach the match for about five hours. I did it all.”

Johnston’s initiative and do-it-all mentality as head coach didn’t go unnoticed. It captured the attention of the athletic administration, which decided to hire Johnston as the director of football operations, where he would handle the day-to-day needs for the football program.

“I came down at my lunch break and Bobby (Robinson) asks me to close the door … and I’m like, ‘Am I about to be fired?’” Johnston said. “And Bobby wants me to be director of football operations. I said, ‘Bobby, I’ve never even played football. I’m a tennis guy.’ But Bobby insisted and said ‘No, no. The only person we’ve considered so far is you.’”

Johnston ultimately accepted the position, and just like tennis, Johnston brought his all to the position to help Clemson football become as organized as possible.

“It was an interesting dynamic, transitioning from women’s tennis to football operations. The change was incredibly difficult at first, because tennis and football mindsets are completely different. It’s rare they bring in cold case outsiders like me.”

Even after West departed, Bowden, and later Swinney, retained Johnston through all the change and turnover, and he remained a steadfast presence in the football office. Johnston admits that there was an adjustment period to the position at first, but credited all three coaches for the respect and professionalism they showed him through the years.

To show just how much Johnston has meant to the football program’s success, after the Tigers’ 40-6 victory over Oklahoma in the Russell Athletic Bowl, Swinney gave the official game ball to Johnston, who couldn’t help but praise how far both he and the program have come over the years.

“I’ve been blessed with three great guys who have treated me with respect, we’re good friends, we’ve worked together, and I’ve been really blessed with how things have worked out,” Johnston said. “I can’t say enough about (former Athletic Director) Bobby Robinson giving me the opportunity in football. He’s been another driving force. Without him, I’m not where I am. And Dwight Rainey, he was tough and a good sport supervisor. He taught me a lot.”

As he heads toward retirement this month, Johnston says the people of Clemson are what will stick with him the most, and the memories and connections he has made will be what he misses the most.

“It’s almost like the Bible says, there are two things that are going to last until the end of time: people and the word of God,” he said. “I tell you what, with Clemson it’s the people. I’ll miss all the people in this building (WestZone). I’ll miss all the coaches and the camaraderie. It’s all about the interactions with people. I’ve loved the people I’ve worked with, and I’ve been blessed to work with great people.

“Clemson has been my life. Clemson’s done more for me than I could ever do for it, and it’s been a wonderful 40 years here and I couldn’t ask for anything better.”