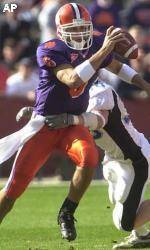 Season tickets for the 2004 Clemson football season will be priced at $199 apiece for the six-game home schedule, the school announced on Friday. This is a $21 reduction in the season ticket price from last year when the Tigers played seven home games.

Season ticket holders will receive a $10 discount from the total ticket price of the six home games individual cost. All Clemson home games will be priced at $32 apiece with the exception of the season ending rivalry game against South Carolina, which will have a $49 ticket price.

As per South Carolina state law, $4 from each ticket sold on all home games goes to the retirement of the Clemson Athletic Department Bond Fee.

The Clemson vs. South Carolina game will be the One Clemson…Solid Orange event for the 2004 football season. The ticket price for that game includes the $4 Bond Fee, as well as a $2 distribution to the One Clemson Fund.

The proceeds from the One Clemson event will be used for specific One Clemson academic efforts. One Clemson recognizes the strength of unity in everything Clemson does as a University. The One Clemson Fund supports the University’s academic goals that will further enhance the ability of Clemson University to make a stronger South Carolina.

As in the past, there is a special season Kickoff Package. This year fans can purchase a ticket to the South Carolina, Wake Forest and NC State games for $113. Other than purchasing a season ticket, this will be the only way to purchase a Clemson vs. South Carolina ticket.

Clemson also announced the ticket prices for road games in 2004. Clemson’s first road game of the year (September 18) will be at Texas A&M and that game will cost $60 per ticket. Clemson’s game at Florida State will have a $38 price tag, while the Thursday night game at Virginia on October 7 will be $35 apiece.

Clemson’s first game in the Orange Bowl since 1982 will be $40 per ticket. The Tigers face Miami (FL) for the first time since 1956 in that facility. Clemson’s road game at Duke carries a $24 ticket price. All ticket prices for road games are set the opponent.