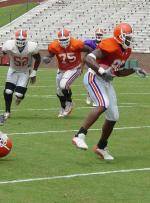 Quarterback Charlie Whitehurst completed 9-14 passes for 108 yards and a touchdown to lead the Clemson offense in a two-hour scrimmage in Death Valley on Saturday. It was the first of three consecutive Saturday scrimmages for Tommy Bowden’s Tigers.

Clemson is in the middle of its Spring practice sessions, which will conclude April 10 with the Clemson Spring Game at Death Valley at 1:00 PM. Admission is free.

Whitehurst completed each of his last five passes in the 76-play scrimmage. He completed five passes to sophomore Kelvin Grant for 52 yards, including a seven-yard touchdown that completed a 50-yard drive. Chansi Stuckey also had a good day catching the ball, spearing three of a scrimmage best 61 years. He had a 30-yard catch and run on a pass from Whitehurst.

Backup quarterback Will Proctor was 6-9 for 42 yards through the air, while freshman C.J. Gaddis, who is also playing baseball this spring, was 2-4 for 29 yards. The top rusher was freshman Brandon Nolen with 10-44 on the ground, while Reggie Merriweather added 9-32 and two short touchdowns. Gaddis scored the other touchdown of the scrimmage on a 21-yard run.

Lionel Richardson was among the tackle leaders and he was in on three sacks for the day. LeRoy Hill also had two tackles for loss, including a six-yard sack of Whitehurst. Tavaghn Monts had the top play among the defenders with a 45-yard interception return of a Gaddis pass.

Bowden was impressed with some of his young players on Saturday. “Kelvin Grant continues to do well at wide receiver. Each practice he makes two or three plays that stick out. Chansi Stuckey is making some plays also, he will continue to improve with experience. He can make people miss in the open field. I was happy that the offense committed just one turnover, but was disappointed that the defense only forced one turnover.”

Bowden also mentioned the play of LeRoy Hill among the linebackers. “We know LeRoy Hill is an outstanding player, he comes to play every practice. We are looking for someone else to step up, we need another linebacker to make plays at the linebacker position in addition to Leroy.”

Starters Tye Hill and Airese Currie did not take part in the scrimmage, as they were competing with the Clemson men’s track team in Florida this weekend. Vontrell Jamison played only the first quarter of the scrimmage. He left with an injured finger and did not return. He is expected back for practice next week.