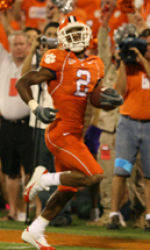 Clemson broke into the top 25 of the Associated Press college football rankings on Tuesday. Clemson is ranked 25th and received 164 poll points after defeating Texas A&M on Saturday, 25-24. Texas A&M was ranked 17th entering the game, but the loss dropped the Aggies out of the top 25.

Clemson is one of seven ACC teams in the top 25 this week. Virginia Tech is seventh, Florida State is 11th, Miami (FL) is 14th, Georgia Tech is 17th, Boston College is 19th and Virginia is 23rd. Clemson and Georgia Tech were unranked in the preseason poll, then defeated ranked teams in the first game of the season to move into the top 25.

This is Clemson’s first appearance in the AP top 25 since September 7, 2004 when the Tigers were ranked 20th. The Tigers were 15th in the AP preseason poll last year, then dropped to 20th after an overtime victory against Wake Forest. The next week Clemson lost to Georgia Tech 28-24 and dropped out of the top 25 for the rest of the season.

This week’s ranking is the 31st top 25 weekly ranking since Tommy Bowden became Clemson’s head coach in 1999. That includes 17 consecutive rankings during the 2000 season. That included a high ranking of number five in the AP poll for four consecutive weeks in October when the Tigers started 8-0. Clemson has been ranked in the final top 25 twice under Bowden, a #16 ranking in 2000 and a #22 ranking in 2003.