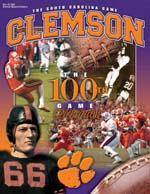 Clemson’s 2002 football game program series has been judged fourth best in the nation by the College Sports Information Directors of America. Clemson competed against the other 117 Division I schools in the judging.

Ohio State, who won the National Championship on the field, was ranked first in terms of the game programs in the stands, while Southern California was second and Notre Dame was third. Clemson was ranked fourth, while Penn State was fifth.