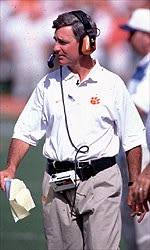 CLEMSON, S.C. – Clemson head coach Tommy Bowden gave the edge to the defense after Saturday’s controlled scrimmage at Death Valley. The Tigers worked in Clemson Memorial Stadium for three hours for over 125 snaps on Saturday. Clemson will have Sunday off, then will have two-a-day workouts on Monday and Tuesday prior to the start of school on Wednesday.

“The defense continued to dominate, but I am happy with that at this point,” said Bowden, whose team opens the season September 2 against The Citadel. “The defense has shown more quickness and enthusiasm so far. We have two weeks to get the offense’s timing down. But, that is usually the case this time of the year.

“Overall it is good that the defense is ahead. It makes me feel more confident about our team at this point. Our defense might be pretty good this year.

“We didn’t have many big plays today on offense, that is something we need to improve on. We will pair things down by Wednesday and get into our gameplan for the opening of the season.”

Sophomore linebacker Rodney Thomas led the way for the defense with seven tackles (including one tackle for loss), one sack and one caused fumble. Freshman John Leake and sophomore Brian Mance each had five tackles. Leake had one tackle for loss. Junior Altroy Bodrick had two pass breakups, one interception and one tackle, which was for a loss. Junior Braxton Williams also had a pass break up and two tackles.

Red-shirt freshman Willie Simmons completed 11 of 22 passes for 121 yards and had five carries for 11 yards, while Junior Woodrow Dantzler was 13 of 33 for 95 yards. Dantzler had to face the number-one defense much of the afternoon. Simmons completed a 30-yard pass to Kevin Youngblood and a 24-yarder to Rod Gardner. That was Gardner’s only catch of the scrimmage. He played sparingly while recovering from a turf toe. Sophomore Matt Schell passed for 42 yards with one touchdown and one interception. He was eight of 15 for the day. Sophomore Joe Bever was three for four for 13 yards.

Kyle Young continued to miss time at center due to a foot injury. Bowden hopes the first-team academic All-American will return next week. In an effort to find depth at that position, Bowden moved Theo Mougros to center much of the day. “We don’t want to go into the first game not knowing what we will do for a backup center. We must decide if center is the right position for Jermyn Chester. We will make that decision next week.”

“I loved playing center,” said Mougros, who has played many positions in his Clemson career. “Anytime you move to another position it gives you a fresh outlook. Center is a very important position in our offense. I just want to do what I can to help the team.”