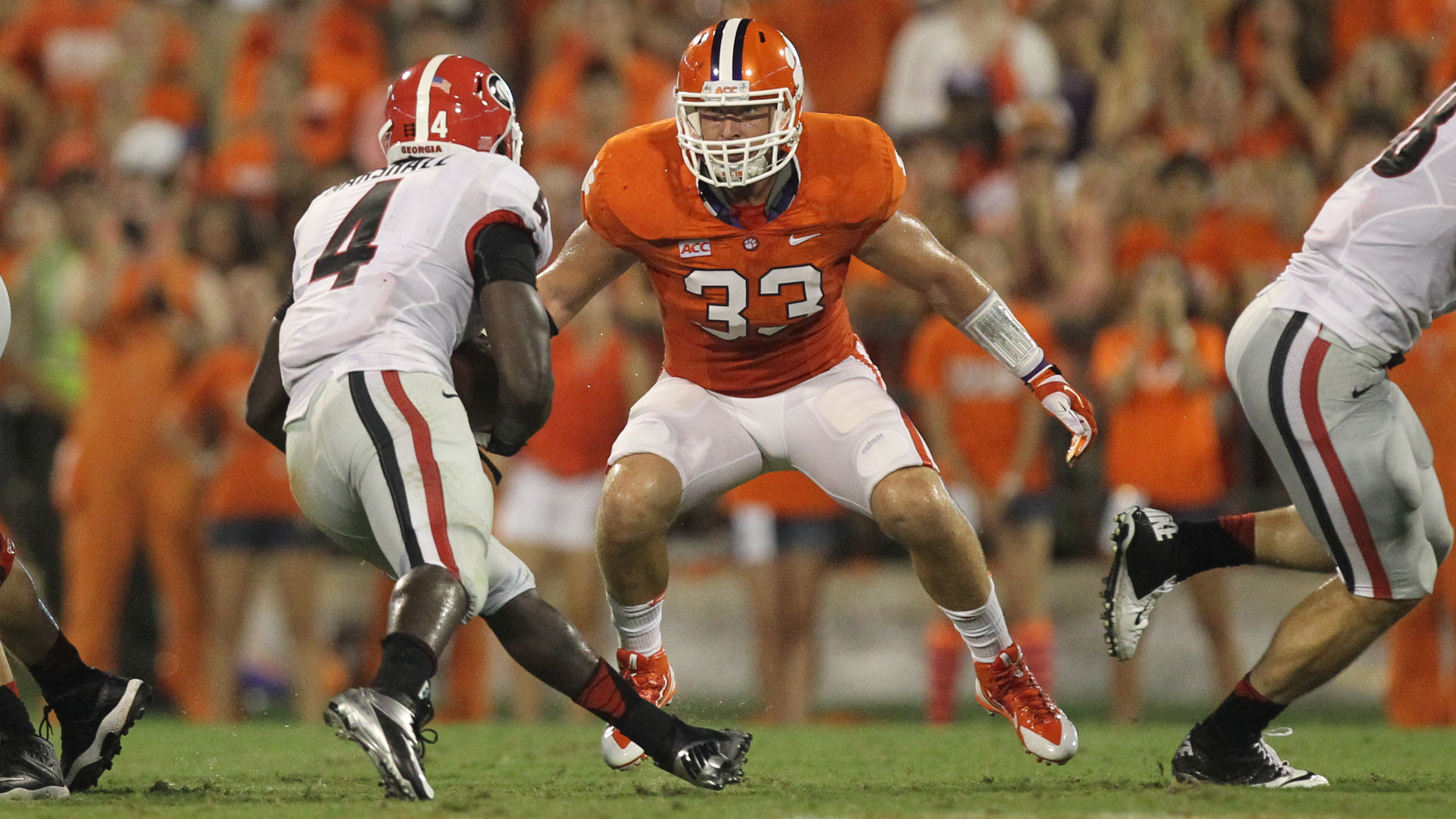 For Spencer Shuey, the wait has been worth it. The graduate linebacker, who fought for and shared playing time during his first three active years, is finally getting his opportunity and reaping the benefits.

Many schools did not take notice of Shuey until later in the recruiting process.

“A lot of the smaller Division I schools like Marshall, Duke, Illinois, Kentucky, and Appalachian State offered me, but then when I had a good Shrine Bowl, I got some bigger offers,” explained Shuey. “That’s when Clemson showed some interest and offered me.”

Shuey knew Clemson was the place he needed to be and he quickly realized there is something in these hills.

“I loved the overall atmosphere when I came on my visit. Once I came, I met the coaches, saw the campus, and realized it was close enough to home, but it was still far enough away from Charlotte and seemed like a great fit.”

After serving as a key player on special teams during his first two seasons as a Tiger in 2010 and 2011, Shuey earned the opportunity to start on defense last year at midseason.

“I wasn’t playing nearly as much as I wanted to and realized it was something I could control,” admitted Shuey. “It was my mindset and I was not being as dedicated as I should have been. Now that I’m a senior, I look back and realize that.

“I’ve matured and I’ve taken things more personally and held myself more accountable for how much playing time I get or don’t get. It’s awesome to show that hard work does pay off. The coaches see every play, so for that to finally pay off for me, it’s been great.”

Turns out, he had a lot to prove. All of that hard work came to fruition in the first game of this season against #5 Georgia on August 31. He had a game-high 18 tackles and recovered a fumble that led to a Tiger touchdown. When asked about it, he gave all the praise to his teammates.

“It was an awesome team win. Stats are great, but I try not to focus on that. I look at the other plays where I messed up or did something wrong, and I focus on those and how I can get better.”

However, he does see how important that win was for the program and believes people are finally buying into Head Coach Dabo Swinney‘s vision for the program.

“It was a huge stepping stone for this program and Clemson in general,” said #33. “We did beat LSU in the bowl game, but there was still doubt in people’s minds, so it was a big statement win and great for our program.”

Clemson became the first non-SEC team to beat top-10 SEC teams in consecutive games with the win over the Bulldogs.

Shuey came in as a part of Swinney’s first recruiting class as a head coach, often referred to as the “Dandy Dozen.”

“All the guys I came in with have been awesome,” said Shuey. “It’s great to see how they have all matured and grown into those leadership roles, and how they have gained responsibility and trust from the coaches.

“They all have great values and I don’t think there could be a better senior group in terms of leadership and values. We definitely can laugh with each other and work hard together. We respect each other so much.”

Not only did he have to fight for playing time his first few years, he also had to learn a whole new system halfway through his Clemson career when Brent Venables was brought in as defensive coordinator.

“Coach Venables came in and has been an awesome coach. He cares about us on and off the field. We’ve all been able to build a great relationship with him and his family. I’ve learned so many things about football and life, things I wouldn’t have known if he hadn’t come in here.

“It’s definitely been a blessing. To make that transition halfway through my career, it wasn’t very tough. It was what was put in front of me, so that’s what I had to do. I dedicated myself to learning the system as fast as possible, and I’m glad I was able to do that.”

Not only has Venables played a role in his development, but former NFL star Ray Lewis’ visit to talk to the team last season was an eye-opener for Shuey.

“Having Ray Lewis come and talk to us last year was incredible, just to hear his mindset and how he approaches every day, every game, and every season. That passion is definitely something I try to emulate day by day, on the field and in life.”

Shuey, who graduated in May with a degree in management, also credits his red-shirt season in 2009 with making him the player he is today.

“Looking back, having that red-shirt year was awesome for me academically and athletically. I graduated, but still have this season of eligibility, so it’s nice to focus on football with less academic pressure.”

Now, Shuey is focused on being the best player and leader he can be. It helps when you love the guys you’re leading.

“The younger guys are all humble, willing to learn, and are great followers,” said Shuey. “They see the example the seniors have set and they have been easy to work with. I try to show them the right way to do things. I lead by example and hopefully they notice and try to take after me.”

After this season, Shuey’s future is up in the air. “Hopefully, I can get a shot to play at the next level, but if not, I’ll try to use my degree and the help of the Clemson family to find something.”

However, how he wants to be remembered is something Shuey can say with certainty.

“I want to be a role model for all the kids who come in after me. I want to help set that standard of ‘best.’ I want them to know that if you take what you’ve been given, use your talents, make the most out of things, and show that you’re dedicated (academically and outside of football), it can happen. I’m an example of how that all ties in.

“Putting in the time and hard work pays off in the long run.”